Trax – The House that built Chicago 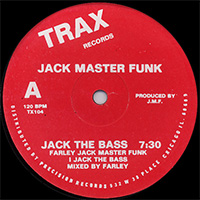 Think of a classic house record and nine times out of ten you’ll think of Trax, although you may not realise it. ‘Move Your Body’? ‘Baby Wants To Ride’? ‘Can U Feel It’? All Trax releases. ‘House Nation’? ‘Acid Trax’? ‘Your Love’? ‘We Are Phuture’? ‘U Used To Hold Me’? Yup, those too. What’s more they introduced the world to producers who’ve become immortalised as some of house music’s greatest innovators – {ln:Larry Heard}, {ln:Marshall Jefferson}, {ln:Frankie Knuckles} – and have provided an outlet for many more of Chicago’s house artists over the years, such as {ln:Armando}, Liddell Townsell, Robert Owens, Farley Jackmaster Funk, Mr Lee, {ln:Adonis}, Fast Eddie, Ralphie Rosario, DJ Rush, Steve Poindexter, Terry Baldwin, DJ Skull… the list goes on. And they did it all by releasing crappy-looking records that sounded like they’d been pressed on sandpaper.

House music’s roots lie in the spontaneous combustion that was a handful of Chicago clubs in the early 1980s. In the days when clubs only needed one DJ, that DJ was in a position to make waves. And in a city where the clubs were usually soundtracked by jukeboxes, those waves could become a storm. {ln:Frankie Knuckles} came to take up the residency of Chicago’s Warehouse in 1977, bringing a style and technique pioneered in, and previously only known to, New York’s disco clubs and loft parties, such as mixing and programming a set and the use of reel to reel tapes. Word spread about Knuckles’ disco, soul and funk phenomenon and The Warehouse quickly became to place to be for a party-hungry gay crowd. This, it is commonly accepted, is where the term ‘house’ originates. Knuckles himself has denied ‘inventing’ house, so what we are talking about here is more a style of playing music based on the idea of a musical flow and transition – for all Walter Gibbons & co’s remixes, no-one had yet made A House Record.

Knuckles moved to another new venture in 1983, The Power Plant, which is situated on the north side of the city, and already a scene was beginning to emerge. Shortly after the opening of The Power Plant, Ron Hardy, who had begun DJing at Den One in 1974 then moved to LA for a spell, took over the decks at The Music Box on the south side. He pioneered a different sound to Knuckles; Hardy’s mix of disco, European electronica, industrial and alternative sounds was spiced with tape edits which he would manipulate and pause by hand. The Music Box became known as a rougher, wilder and more hedonistic alternative to Knuckles’ sophisticated mixes and it was here that the straight black crowds from the south side caught the bug.

Hardy is credited by some as the ultimate creative DJ, an innovator in the way he read the dancefloor, made it his own and defined a style of music into the bargain. He was certainly dedicated – a true party animal, he was known to live his life from his DJ booth, sleeping there and spending the days practising his craft.As the friendly rivalry between Knuckles and Hardy developed, other DJs began to push the sound, like Wayne Williams, Steve Hurley and Farley Keith Williams. Then there was Jesse Saunders, who spun at Chicago’s other major house club, The Playground. Jesse, who had musical training, was constantly searching for gimmicks with which to further his name as a DJ and had taken to creating his own drum machine tracks to play from tape. He went into the studio with the idea of recreating an obscure disco bootleg, the name of which he says escapes him. But which also turned out to be the first House record…

{ln:Jesse Saunders}: “So I’m looking for someone to help me make a record, and it so happened that Vince [Lawrence] had come in the club looking for me to play a record that he had, this way-out avant, garde thing, ’cause at the time I would play Devo and the B52s. He’d talked to me about how his father had this label and where they would press records, so the first person I thought of was Vince. He took me down there and that’s where I met Larry Sherman. And that’s when the nightmare began! [laughs]”

A former musician, Larry Sherman bought Musical Products, Chicago’s only pressing plant, in 1983. This was the vital link in the chain: access to the means of production. Jessie and Vince made a track called ‘On And On’, came up with Jes Say Records as a label and persuaded Sherman to press them it up for them at $4 a throw.

JS: “We had five hundred records made and took ’em to the stores. We promoted the records like we promoted the parties, with posters and flyers and whatnot. On the first day the record sold 150 copies and by the third day it had sold out. And we went back to Larry, three or four days after picking up the first records, and ordered a thousand more. Now, he’s got a pressing plant in Chicago, and a small plant at that, and he’d do a little jazz thing or a little blues thing here or there, and they usually ordered a couple of hundred copies and gave ’em to their friends and wouldn’t come back. And we showed up and we say, ‘oh, we sold out in a couple of days’. He’s like, ‘Really? Where?’ So Larry’s thinking to himself ‘Wow, I got these two young kids that can sell records. I’m gonna see if I can get in on this.’ Basically what he offered me was to press all the records for free and just cut him in for a percentage, which at the time I thought was a great idea. So we expanded our distribution to other stores, and the next thing I knew we had sold nine thousand records, just around Chicago.”

Sherman had set up a label called Precision to make the most of his new venture, but when he saw what Jessie and Vince had achieved and had subsequently visited Hardy’s Music Box, he realised something was brewing. He wanted to get more involved, yet neither he nor Saunders wanted to use their own labels for joint projects, so they set up Trax. Vince Lawrence came up with the name.

Jessie Saunders provided the first Trax release, ‘Wanna Dance/Certainly’ by Le Noiz and Larry and Vince took care of shifting them. In fact, several other Trax artists also worked for the label, with Wayne Williams, Rachael Cain (alias Screamin’ Rachael) and Ron Hardy all pitching in. A group of creative people had found themselves the ideal outlet.

Rachael remembers it thus: “Vince Lawrence was such a go-getter, he used to just shop the records out of the trunk of his car! In one day, you could go to the studio, make a track, take it out to the club, because Ron Hardy was very co-operative, and he would play it, and you could figure out then and there, ‘is this gonna work?’ And at one time Larry even had his own lathe, so he could cut an acetate, and we could do it all in one day. So I think it was that Larry basically had everything we needed. But Vince and Jesse, god, they were just visionaries. And I think that they don’t get enough credit for what they have done.” “I always wondered what made Vince and Jesse want to go to vinyl, but I guess it was just the fact that they met Larry, Larry had the pressing plant, and they saw an opportunity to go directly into the medium, y’know? And I guess that’s pretty much how it started, because we, due to our association with Larry, could move faster than anyone else. And then of course things followed, ’cause Jamie Principle came right after that.”