The History Of House 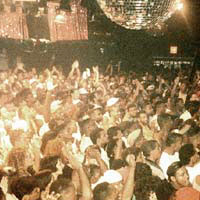 It’s been twenty years since the first identifiably house tracks were put on to vinyl, twenty years which have changed the technology behind the electronic music revolution beyond recognition but left the basic structure of house intact. It’s twenty years since it was being said house couldn’t last, that it was just hi-NRG, a fast blast that would wither as quickly as it had started. But then the music reinvented itself, and then again and again until it gradually dawned on people that house wasn’t just another phase of club culture, it was club culture, the continuing future of dance music. The reason? It’s simple. People like to dance to house.

Like it or not, house was first and foremost a direct descendant of disco. Disco had already been going for ten years when the first electronic drum tracks began to appear out of Chicago, and in that time it had already suffered the slings and arrows of merciless commercial exploitation, dilution and racial and sexual prejudice which culminated in the ‘disco sucks’ campaign. In one bizarrely extreme incident, people attending a baseball game in Chicago’s [Comiskey] Park were invited to bring all their unwanted disco records and after the game they were tossed onto a massive bonfire. Disco eventually collapsed under a heaving weight of crass disco versions of pop records and an ever-increasing volume of records that were simply no good. But the underground scene had already stepped off and was beginning to develop a new style that was deeper, rawer and more designed to make people dance. Disco had already produced the first records to be aimed specifically at DJs with extended 12″ versions that included long percussion breaks for mixing purposes and the early eighties proved a vital turning point. Sinnamon’s ‘Thanks To You’, D-Train’s ‘You’re The One For Me’ and The Peech Boys’ ‘Don’t Make Me Wait’, a record that’s been continually sampled over the last decade, took things in a different direction with their sparse, synthesized sounds that introduced dub effects and drop-outs that had never been heard before.

But it wasn’t just American music laying the groundwork for house. European music, spanning English electronic pop like Depeche Mode and Soft Cell and the earlier, more disco based sounds of Giorgio Moroder, Klein & MBO and a thousand Italian productions were immensely popular in urban areas like New York and Chicago. One of the reasons for their popularity was two clubs that had simultaneously broken the barriers of race and sexual preference, two clubs that were to pass on into dance music legend – Chicago’s Warehouse and New York’s Paradise Garage. Up until then, and after, the norm was for Black, Hispanic, White, straight and gay to segregate themselves, but with the Warehouse, opened in 1977 and presided over by {ln:Frankie Knuckles} and the Garage where {ln:Larry Levan (1954-1992) – Remembering a Legend…. ‘Larry Levan} spun, the emphasis was on the music. (Ironically, Levan was first choice for the Warehouse, but he didn’t want to leave New York). And the music was as varied as the clienteles – r’n’b based Black dance music and disco peppered with things as diverse as The Clash’s ‘Magnificent Seven’. For most people, these were the places that acted as breeding grounds for the music that eventually came to be known after the clubs – house and garage.

Right from the start there was a difference in approach between New York and Chicago. “All of the records coming out of New York had been either mid or down tempo, and the kids in Chicago wouldn’t do that all night long, they needed more energy” commented {ln:Frankie Knuckles} after his move to Chicago. The Windy City was seduced to a far greater extent by the European sound and when the records started to come, it showed. Whereas garage in New York evolved more smoothly from First Choice and the labels Salsoul, West End and Prelude, there was no such evolution in Chicago. Opinions still differ as to what the first house record was, but it was certainly made by {ln:Jesse Saunders} and it was on the Mitchball label – probably Z Factor’s ‘Fantasy’, but there was also another Z Factor tune which went by the name of ‘I Like To Do It In Fast Cars’. ‘Fantasy’ sounds extremely dated now but ten years ago it was like a sound from another planet, with echoes of {ln:Kraftwerk ‘Kraftwerk’s} heavily synthesized string sounds, a Eurobeat bassline and a simple, insistent drum machine pattern. Suffice to say, the record remained obscure outside the close-knit urban Chicago scene.

“Those records didn’t really motivate people” says {ln:Adonis}, one of the early producers on the Chicago scene. “The first was Jamie Principle’s ‘Waiting On Your Angel’. See, before there were records there were cassettes, and that was the hottest thing in Chicago. It was so hot {ln:Jesse Saunders} went in and recorded that track word for word, note for note, and put it out on Larry Sherman’s label Precision. It was so influential that four or five records came out that took its sounds.” Within a year though, others were fast joining. Saunders, who by then had come out with his Jes-Say label, with Farley Keith (or Farley ‘Jackmaster’ Funk) getting in on the act. Frankie Knuckles, who had already done some remixes for Salsoul was also beginning to work on his own productions. By 1985 it was clear that something big was beginning to stir. Ron Hardy, who was to become the backbone of the Chicago club scene by consistently breaking the new records, began playing at The Music Box around the same time as Frankie Knuckles left The Warehouse, and other DJs like Farley and the Hot Mix 5 who threw down the mix shows on the radio station WBMX were making names for themselves. But making a record wasn’t the priority for most of the DJs at the time – they were making music specifically to play at the clubs and the parties that were beginning to spring up in the city. {ln:Larry Heard} and Robert Owens, later to be known as Fingers Inc, and Steve Hurley were all experimenting with basic rhythm tracks long before they made the jump to vinyl.

“I started dabbling in making my own music.” says Hurley. “Just making tracks to play as a DJ, not really thinking as far as producing – more to do with just having something to play that nobody else had. And one of these tracks, ‘Music Is The Key’, got such a good response that I decided to borrow some money and go in with another guy, who happened to be Rocky Jones, and put the record out.”

That momentous occasion was the beginning of DJ International Records, one of the two labels that was to give all the aspiring producers in the city a chance to get their music on to vinyl. The other, Larry Sherman’s {ln:Trax – The House that built Chicago ‘Trax Records} was already up and running, though to begin with Sherman was attempting to break into a more commercial market with Precision. ‘Music Is The Key’ (the first house record to include a rap, incidentally) took house on a step by incorporating more musical elements and a vocal, and by the time Chip E’s ‘Like This’, also on DJ International, appeared house had discovered real vocals and the sampled stutter technique that’s such an integral part of dub remixes today. “It took a little while for the sound to develop” remembers London DJ Jazzy M, who worked in a record shop at the time and was one of the very first to get house on the radio in Britain with his immensely popular Jackin’ Zone show on London pirate station LWR. “When ‘Like This’ and Adonis’ ‘No Way Back’ came out, that’s when it picked up. At first it was just drum machine programs and they were called trax, like there was Chip E Trax and Kenny Jason Trax and that’s what house was, with maybe a few dodgy samples. I can remember talking to Colin Faver, who was one of the first DJs here to get into it, about ‘Like This’ and we were both really excited by it.”

Meanwhile, things were gathering pace over in New York though the development was a lot slower. Mixers like Larry Levan, Tony Humphries, Timmy Regisford and Boyd Jarvis, who came straight after Shep Pettibone and Jellybean Benitez were making ground as remixers, and fired by the raw club sound of Colonel Abrams, the deep, soulful club sound that became known as garage was taking shape with early releases on the Supertonics, Easy Street and Ace Beat labels. Paul Scott was one of the first with ‘Off The Wall’ in 1985 but before that there was Serious Intention’s deep dub classic ‘You Don’t Know’ and even before that was World Premiere’s ‘Share The Night’.