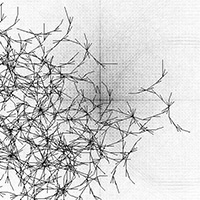 The world of electronica might have become overcrowded since their first release more than a decade ago, but Autechre are still burrowing through microscopic cracks into the cranium on their new Warp album Draft 7.30. David Stubbs meets the curators of this month’s UK All Tomorrow’s Parties festival, and finds out why their future sound hasn’t gone stale. The world of electronica has become overcrowded. With the expansion and availability of hardware and software, and the relative ease with which new music can be produced and distributed, we’re awash in a worthily colourised sea of Ambient, avant Techno, blips and blissfully concussive beats, reconstituted samples and soundwaves, not every digitally enhanced moment of which seems absolutely necessary.

Given this creeping, blasé feeling of ennui, small wonder there’s a paradoxical nostalgia for the early days of Futurism, a hankering for the days when electronic music was a remote and alien proposition, be it grainy photos of Luigi Russolo’s pre-WW1 noise intoners or the 50s electronic soundscapes of {ln:Karlheinz Stockhausen: Electronic Music’s Enfant Terrible ‘Stockhausen} and Xenakis. In popular music, the success of groups like Ladytron is the result of a similar wistfulness for the earliest days of electro-pop, when the likes of {ln:Kraftwerk}, {ln:Gary Numan} and Visage projected a provocatively soulless, poseurly and effeminate affront to “authentic” rock values; when the appearance of Steve Strange on Top of the Pops somehow intimated that by the year 1999, gay robots would be our masters. That kind of opposition has largely been erased, but still, there’s been a faint sense of disappointment among those futurists today, now that the future has finally arrived.

Autechre are an antidote to this saturation. Without taking the retro-futurist line, they have retained a sharp, distinctive gleam amid the commonplace welter of 21st century electronica. As well as their diamond laser incision, there’s an exhilaration about Autechre that hurtles both them and the listener fast forward, a feeling that there are still virgin areas of Techno-space out there that remain uncolonised, still new places to go, new noise to make.

To the newcomer.Autechre might appear maddeningly cryptic, from titles like “Pen Expers” and “Bine”, to their sound, which has gravitated at a rapid, exponential rate from their Hardcore beginnings to what many would regard as the abstract, cerebral tendencies of their most recent albums. Conversely, there’s a mistaken impulse to see Autechre’s output as something to be deciphered, a series of codes which, if cracked, will enable a mystical, Matrix-style breakthrough to some truth just beyond the jackhammer flamewall of their highly evolved breakbeats.

Autechre deplore such attempts to get a handle on them. As Sean Booth tells me when I meet up with them in East London, on the eve of their latest Warp album Draft 7.30, they believe their music is about evading all forms of “meaning”, signification or representation – hence its oblique twists and turns and metamorphoses, its edgy, near pathological determination not to touch down where anyone has trodden before.

“We are absolutely not trying to represent or duplicate anything at all,” declares Booth. “We’re purely interested in being creative. I like to have space to wander around… I don’t like to have to be tied to something. I like to be able to listen to something months later and have forgotten things. Which isn’t easy when you build a track around a theme or idea, because that’s the only thing people remember. I like not providing that basic template.”

Autechre’s approach is strictly antithetical to most popular music, which is essentially either nostalgic (be it retro-derivative, mischievously postmodern or sentimentally redolent of bygone summers) or it’s written with one eye on “classical radio” posterity, over-eager to familiarise itself with you, become the stuff of future revivals, flecked with associations and connotations. Autechre, by contrast, make no such deposits in the memory bank. Their modus operandi is not unlike the theory of a purely “non-associative” electronic music posited in the 1950s, except Autechre wriggle free even of that definition. There are actually allusions and references in their work – it’s just that they’re so obscure, only they and perhaps a couple of their mates get them.

Still, once you get over regarding Autechre as a puzzle or problem, you can take them for what they are: a cerebral joyride, for starters, offering amazing liquid metal events in a temporal and spatial framework that’s always identifiable as uniquely their own.

Frank Zappa’s old saw about writing about music being like “dancing about architecture” is among the most overrated quotes in the rock lexicon. However, Autechre, whose music is “about” only itself, do present a particular problem. Even the garrulous Booth and Brown clam up somewhat when the topic of their music arises. That’s partly out of a reluctance to give away secrets, partly because it feels like a betrayal of its pristineness. Descriptive passages which, for example, compare abstract sounds to the noise of household objects, are helpful pointers, but hopelessly subjective, like Alexander Rutterford’s confounding yet meticulously exact computer-animated DVD transcription of their track “Gantz_Graf” (2002), which would almost certainly have made Wassily Kandinsky’s head explode with rapture had he ever been able to see it.

Autechre might well strive to be reminiscent of nothing, but that doesn’t stop some commentators, such as the Virgin Encyclopedia of Dance Music, accusing them of being “complacent” for disregarding the sequential trends of dance music. Yet, initially out of necessity but later out of wisdom, they have never confused futurism with faddishness or fast turnover of state of the art technology. On turning up to interview them in East London, I feel obliged tomapologise for my decidedly non-futuristic tape recorder, a steam-driven affair held together by an elastic band. I might as well have turned up with a quill and parchment. However, Booth and Brown are having none of it. Respect for the cassette.

We grew up in a music-swapping community,” says Brown. “Things would have been really different if we hadn’t had cassettes, we wouldn’t have found any other way into music. And I like cassettes recorded music. The events are more dynamically intact, if you like. And the cassette fuelled the whole world of Walkman, music on headphones, the whole idea of being able to listen to music anywhere.”

“I was amazed at people who said they didn’t actually have a cassette player any more,” adds Booth. “Everyone adheres to this idea that you’ve got to throw an old bit of technology away when something new comes along. Why? When do you decide that something’s obsolete? I mean, I’m not saying I drive a Morris Minor, but…”

“Vinyl’s the best format. CDs are all or nothing,” opines Brown, warming to the theme. “They skip and glitch. Say you buy a CD and you can’t actually play it – that’s it, it’s gone. Whereas you could build your own record player with sticks and needles and paper combs. With digital, once you’ve lost the power source, you’ve lost everything.”

It always struck me as ironic that dance music, which is driven by such a strong technological imperative, is still obliged to operate through the relatively ancient format of vinyl, for DJing purposes. “I don’t see that the technology being new has any bearing on whether the use of it is new,” argues Brown.

“We have slowed down in our uptake on new stuff,” Booth continues, “purely because spending time checking out new things distracts you from becoming properly acquainted with the things you’re already using. We’ve always used roughly the same toolset during the years but the amount of new stuff you’re exposed to increases exponentially. We were seriously compromised economically earlier on. We had to buy hardware, there were no plug-ins or anything like that. We’ve tried to stick to our guns and grow at the same rate mentally, without being led astray by new technologies.”

“That’s how we were moulded,” Brown cuts in, “starting out with no cash and having to spend a year and a half with the piece of equipment we had, getting to know it inside out before we’d both chip in to buy something new.”

Booth reprises, “I wouldn’t mind if everyone had to use the same three tools to make music because ultimately it’s down to your imagination.”

The accusation of complacency also implies that Autechre are oblivious to the rest of the contemporary musical universe, that their reluctance to allow outside influences to permeate their sound implies indifference, even contempt towards their peers. However, they’re manifestly steeped in modern sounds, their tastes reflected in their curated line-up of this month’s UK branch of All Tomorrow’s Parties festival.

“It was smart getting asked to do All Tomorrow’s Parties,” says Booth. “It’s an opportunity to put something on that we would have no choice but to go to. The wish list was easy. We’ve found as it’s been booked that loads of the artists are into quite a lot of other artists. It should make for some good music. We’re looking forward to seeing Curtis Roads and Mark E Smith in the same place.”