Draft 7.30 has it’s less extreme interludes. On “theme of Sudden Roundabout”, you can just about make out faintly recognisable shapes. There are passages of film noir-ish tension but also an intimation of light and warmth filtering through its mental thickets. Autechre are one of the few groups to have emerged from the Techno/dance world whose music approaches the experimental regions of musique concrete. Yet there are reconisable loops and recurrences, a certain feverishness which dispels any air of scientific or academic aridity in their work and betrays their dance roots. Whereas some concrete composers leave you with a lingering feeling of bubbling test tubes and algebraic equations, with Autechre there’s a bristle, a buzz. You can imagine them at work, on the balls of their feet, surrounded by piles of old hip-hop 12” singles, brewing up these sonic storms and going mental as Scissorhands with the editing.

As for the duo themselves, their reflections on Draft 7.30 are vague and hesitant. “It feels a bit more open again,” offers Brown, while Booth adds, “It’s not thrust in a particular direction.” The downside for Autechre is how the “openness” of their sound allows for contradictory reactions. Like anyone else, they’re eager for feedback even as they’re sometimes dismayed at the lack of consensus.

“Every time we have an album out, we get conflicting reports,” despairs Brown. “There’s one strain of opinion, then another one comes in reinforced numbers. Mostly, we’d been hearing that this one was more accessible than Confield. But then someone comes along and fucks it all up and tells us that they think it’s the coldest, hardest work we’ve ever done. ‘Confield was so warm, what are you up to?’”

“We’ve had it all,” sighs Booth. “More accessible, less accessible, cleaner, dirtier… In the end, you get completely confused. It’s like, what does the world think? It’s just snap judgements. It does take our music a few weeks to sink in.”

Unlike many in the world of electronic music who are hard pressed and ill-equipped to convert their soundlab experiments into some show of creative work being done, Autechre thrive paying live. For them, it isn’t just a case of pushing a bit of software into a machine and pressing the On button. Their live shows are spontaneous, creative affairs, done on the fly, each freshly minted permutation of sound, rhythm and texture expiring in the moment of its creation. As Booth once said, “The only music that’s really futurist is that which hasn’t been created yet.” They generally insist on playing in near complete darkness, again to minimise unwanted visual associations and focus concentration entirely on the quicksilver motions of the music burrowing deep inside your head. Autechre have even talked about achieving telepathic communion with audiences. 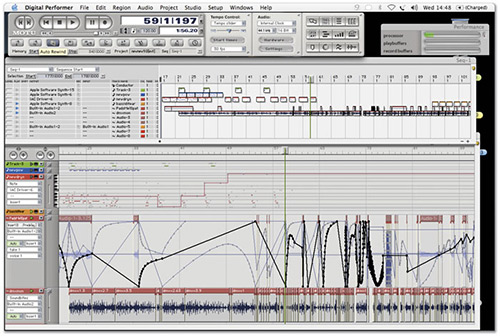 “In a club the ideas don’t get a chance to be edited out, so what you’re getting is much more raw,” says Booth. “I don’t want to go off on one about emotion or the subconscious, but there’s obviously a different cognitive process going on. It’s the same as when we jam in the studio, really, that’s what got us doing it in the first place. Loads of the tracks we were doing back when we started were unedited live recordings, we just thought it would be good to take that way of working outside. At All Tomorrow’s Parties we’ll be working as Gescom [Autechre’s alter-ego project, involving a crew of anything up to 20 people], which is great because it’s always different people, so it’s challenging and liberating at the same time. It’s about the most unroutine organization we’ve ever been a part of.”

Born in 1970 and 1972 respectively, Brown and Booth were just too young to catch the first wave of electro-pop which [is] presently so fashionable to simulate. They were toddlers when Kraftwerk arrived on the scene. They came upon most of their futurist ancestors retrospectively, and their attitudes towards them are not always reverential. As one of the surprisingly few contemporary electronic acts who sound like they’ve docked in, or at least sniffed around the space stations established by the 50s electronic pioneers, what do they make of the likes of Stockhausen, et al?

“We first heard Stockhausen in 1991,” frowns Booth. “But I didn’t really click with it until I heard Tod Dockstader a few years later. Stockhausen fell foul of his own theories really, really quickly, I think. He’s done three, maybe four works… Kontakte, Gesang Der Junglinge among them – but compared to Stockhausen, Tod Dockstader felt very soulful, more fat and warm. I do rate Kontakte, the original two-track tape, not the one with extra percussion and piano, that is. We didn’t think about concrete for years, didn’t really know what it was. But then when I understood what serialism was about, and this anti-rhythmic stance it took, I went cold on it. It seemed just as bad as people taking a purely rhythmic stance. It was like, I’m anti-you and now I’m stuck here.

“A lot of composers from that era talk so much crap,” he spits. “Ligeti and Xenakis from that era are my favourites, I suppose and Tod Dockstader. Also Edgard Varese – Poeme Electronique in particular.”

“I understand it,” he concedes. “When you’re listening to music with a fixed structure, say basic verse and chorus, it’s all about catharsis and anticipation. The loop changes, you’re in a new loop, you assess the loop, then your brain relaxes for a few bars, till just before the next change when you start paying a bit more attention, getting a bit more hyped up and then you capitalise on that. It’s tension/release, tension/release. I don’t like films that are predictable and I don’t like music that’s predictable. I don’t need that kind of security. There are so many possible permutations, so many types of music, so many things that you’d expect music to be more varied. It stands to reason.”