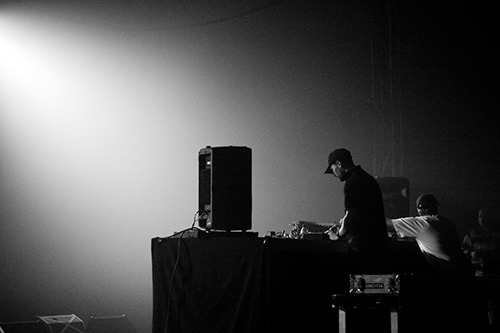 In the ten years since Warp’s pioneering Artificial Intelligence compilation introduced Autechre’s oblique strategies to the world, Sean Booth and Rob Brown have come to occupy a special, almost unimpeachable place in the pantheon of electronica. Draft 7.30 is no doubt as eagerly awaited by the duo’s fans as previous releases – but the unconverted might be entitled to wonder why. Because, without the required engagement from the listener, Autechre’s music appears to be hermetically sealed from influence, revolving and regenerating, unchallenged and unchanging, in its own obsessively sterile space. But such accusations of stylistic stasis miss the point. Autechre’s forward motion happens at a subatomic level – just as it always has done. Their restless quest for variety takes place not from year to year or album to album; not even from track to track, but surreptitiously and constantly, from bar to bar.

Draft 7.30’s opening track, “Xylin Room” illustrates Autechre’s constant modulation as well as any other. It opens unengagingly enough, with dull, woody clunks and a stuttering buzzsaw bass. But, slowly and unobtrusively, the percussive patterns become more complex until they obtain the three-dimensional quality of an intricate, spindly structure whose attenuated rhythms somehow move in concert. Distant, muted colours loom like Rothko canvases. Hi-hats shiver and spit, throwing off bright spatters of high end noise. The mix parts, opening up to admit the doleful sound of breaking glass surrounded by the kind of hollow underpass reverbs that haunted Joy Division and Pere Ubu alike. Eventually, the modus operandi is revealed, and a twitchy, stop-start cycle emerges for the listener to lock into as the music pauses for a fraught patch of silence and then lurches forward once more.

It’s a headphone freak’s perfect prescription, this stealthy progress. The sense of space, the way the precise sonic placement is counterbalanced by a stream of random intervention, the bursts of intuitive mixing desk wizardry like the backmasked blur of sound that hardwires “Xylin Room” into the following track (“IV W IV W VII”). Booth and Brown have never made a secret of their grounding in 1980s hip-hop; their delight in the half-buried snatches and evanescent scratches that brought the music of Eric B, or Curtis Mantronik, or Hank Shocklee to life. And Draft 7.30 is a feast of buried treasure, a flickerflame parade which continually offers up magical fragments of sound, revelatory and transistory in equal measure.

Magical, or magickal? Autechre’s music is an initiate’s thing, after all – an artfully abraded palimpsest, all terse, runic codewords and half-occluded signals. On “IV W IV W VII”, its dark cavernous undertow lurks ominously, barely perceptible beneath the bright clatter of the crosshatched beats. By contrast, “6IE.CR” is downright funky. Its glittering, exoskeletal drum pattern bears clear traces of mutant electro ancestry. But there’s something arcane about the way the track folds a rich, bristling mid-tone into its clattering maw. Alchemically, a sweetly hesitant chord pattern emerges, pale and frsh as February flowers, and a tentative kind of resolution takes place.

Draft 7.30’s middle section offers similarly compromised beauty. “Surripere” opens with swelling, long traveling melodic lines and a reassuringly cicular rhythmic loop – but fragmentation and disruption are Autechre’s tactical default settings. Sure enough, a horrorcore snare sound crunches bleakly into the foreground, bringing with it sharp-edged percussive acolytes. The composite effect is exquisitely mournful – music for half-finished out of town developments, for graffiti covered playgrounds, for layby wreaths – a wayward, collaged surge whose abrupt cessation afflicts the listener like a sudden abandonment. The doleful gongs and tympani of “VL AL” prolong the mood, counterpointed by a constant pedal note of white noise, which writhes at the edge of perceptibility, like waves on a shingle beach.

“P:NTIL” threatens to break ranks. Shot through with playful cybernetic burbles, it is almost jaunty, and a breathy, gurgling loops threatens to hawk up a lump of digital phlegm at any moment. But somehow the music retains its elegiac dignity, as a vintage synth, somewhere between a harp and a lute, plucks out a timeless melody and opens a fleeting connection to the Elizabethan melancholy of John Dowland or William Lawes. By contrast, “V-PROC” is Draft 7.30’s most danceable and cinematic moment, its full frequency construction taking in electroacoustic squelches and Lalo Schifrin-like vocal stabs that lend a touch of period tension. The natural kit sounds of its brazen funk break sing out cleanly, only occasionally betraying traces of digital trickery.

The record closes with “Reniform Puls”, but it’s a far from straightforward finale. The music is overrun by anarchistic incursions, constantly disrupted by flurries of noise. Ultrafast flickers and urgent knocks pull urgently against the flow. Sound can only be held in suspension for so long, it seems – its impulse is towards freedom. Or, perhaps, towards its own undoing. Draft 7.30 eventually subsides to the sound of raw electricity mains hum, twitching and fading, with aching slowness, into silence