But even then, with its cash reserves depleted and time fast running out before the company went under, ARP was not without options. “We could have cut our losses,” Pearlman sighs. “We could have said, ‘We’ll rent out half the building, we’ll go very lean, we’ll operate in a survival mode.’ The biggest mistake was thinking we could turn it around by playing catch-up.”

In 1979, ARP introduced a 16-preset electronic piano. “It was supposed to rescue us,” says Pearlman. But a switch on the piano failed: “It was one of those things that went up too fast because we didn’t have the time or money to do it right,” he admits. “when you left the unit in, say, the back of a hot car, the Mylar insulation in the switch would melt.” [Dodds comments, “The product was released well before it should have been. It was flawed in two major ways. It was terribly noisy, and the membrane switch had an inherent design flaw. I felt terribly bad about that, because it was my design. At several points I requested that manufacturing be shut down until the problems could be corrected, but the management decided that we couldn’t do that or the company would be out of cash and out of business within a month. So over my protests they continued to manufacture.] The pianos began coming back in for repairs nearly as quickly as ARP shipped them out. “The company’s sales plummeted, repair costs went up — all sorts of things started going wrong at that point,” Pearlman recalls. That year, the board asked Friend, who had masterminded Avatar and become president non grata in the process, to resign. 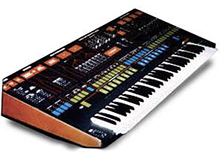 Pearlman returned as president, and another “bailout” product was developed — the Chroma, a microprocessor-operated touch-sensitive polyphonic synthesizer that would eventually prove quite profitable for another company. [Unlike the Quadra, which was designed, under the direction of David Friend, as a “synthesizer sandwich” consisting of an Omni, an Axxe, and a couple of other synthesizers strapped together in one box under the control of a microprocessor, the Chroma was a new product from the ground up. “The Chroma marked a major departure in R&D direction for ARP,” Dodds explains, “and the fact that it didn’t make it in time could be considered partly my fault. There were two occasions on which I froze the project, brought it back into R&D, and said, ‘It’s not ready.’ But one of those is what’s paying off in spades now. We decided to configure the instrument so you could have individual channels under computer control. I had to stop the project and do a ground-up design to do that. The decision was a risky one, and it may have added to the company’s troubles.”]

By this time, it was too late for ARP. Suppliers were providing parts on a COD-only basis, First National Bank was making angry noises, and, instead of coming to grips with its destiny, management was trying to keep the show going with sleight of hand. Desperately trying to turn 1980 into a break-even year, Pearlman lent ARP $168,000 so it could ship a $1 million backlog in November and December. “In January we discovered we had created a $300,000 loss,” he recounts with obvious regret.

Eventually, ARP found itself pushed beyond desperation; frantic to stay alive, it began playing games with money. Philip Dodds, who later helped First National unravel ARP’s tangled finances [and arrange sale of the Chroma to CBS], explains that “we were shipping units to dealers with the promise that, if they didn’t sell them, we’d take them back and credit them … for the purpose of inflating receivables. The purpose was to generate enough cash flow to get to the point where the practice wouldn’t be necessary.” But when First National — which ARP owed $1.8 million, including nearly $1 million in receivables financing — found out, it decided to pull the plug.

The bank took ARP to court. After listening to First National and the company’s other creditors, the judge appointed a trustee to oversee ARP’s liquidation. On May 13, 1981, the trustee took over and on September 11 presided over the sale of all the company’s tangible and intangible assets. [The sale was arranged in large part by Philip Dodds, whose memories of this period are vivid: “The first thing the trustee did was to fire all of the management except me. He then required me to operate the balance of the company, which was tricky, because the week before I had been trying to figure out how to meet the payroll. Then I didn’t hear from him for weeks, and he was the only one with the power to sign checks, which made operating the company somewhat difficult.

[“I did manage to get a couple of things through. I convinced him to keep the service department on, so that we could get repaired units out, and ship parts — you know, keep ourselves ethical. But each week he asked me to cut more and more. The first department that had to be cut in its entirety was, not surprisingly, Research & Development. He had me scale the company back until there was literally no one left, except for the two service techs and one person in accounting. So for a period of three months, I came to work in an empty 50,000 square-foot building, and I spent all day on the phone looking for a buyer. I re-contacted CBS and struck a deal with them to sell only the engineering department and the Chroma, convincing them by sheer brute force, just by not leeting them alone. I called them four or five times a day for three weeks running.

[“I originally tried to get them to buy the whole company, but they rejected that out of hand. A bankrupt company is a liability, not an asset. So I said, ‘Well, how about the Chroma? It’s a hot product.’ And there was enough belief in that that they said okay, it might be worth it. So they made an offer, with the provision that I had to contact all the people in R&D who had been laid off for three months and get them to sign contracts guaranteeing that they would come to work for CBS if the deal went through. Well, I went out and did that. But when the deal was finally arranged, the trustee felt that CBS would be willing to pay more. He told me to tell CBS to go fly a kite. So I went to the bank and told the bank, ‘Hey, look, your trustee is about to blow the deal.’ At that point, they intervened and struck the deal with CBS. By the middle of September I had rehired the entire department, relocated ten miles north of the old factory, and we were hot and heavy back on the Chroma again.”]

CBS Musical Instruments acquired ARP’s inventory for $300,000, and, for an additional $50,000, picked up the manufacturing rights to the Chroma and the [four-voice] electronic piano. In its first year with the product, CBS sold more than $3 million worth of Chromas. But stockholders and creditors lost more than $4 million when ARP went under; Pearlman and members of his family lost a total of nearly $500,000 in cash.

David Friend, now chairman of Computer Pictures Corp., a Boston-based computer graphics company [as of 1999, he was with FaxNet, which was later acquired by Critical Path], maintains a studied indifference to the ARP affair. “We were in a risky business, and we made one bad move,” he explains, referring to the Avatar. “On top of that, we had some lousy management that blew away what little we had — that was the end of the ball game.”

Pollock prefers to place ARP’s failure in a broader context by citing “companies with larger resources, market conditions, and worldwide competition” as elements that contributed to its demise. When pressed he concedes that the Avatar was the critical factor.

Mancuso has a simpler explanation: “Among the three of them, I couldn’t get one full-time chief executive officer. Alone, they’re each worth about 0.4 on a scale of 1 to 10; together, they add up to about a 2. There was no reason ARP should ever have gone out of business,” he concludes. “It’s a sin. It’s a tragedy to see a beautiful little company, and 200 jobs, go under because of bad management. All three of them should physically have to go to jail and serve six months for screwing up a beautiful thing like that.”

[Philip Dodds sees things a bit differently. “One person who was very much maligned during the troubles at ARP was Al Pearlman,” Dodds comments. “And he was, throughout, the one who categorically defended the correct path, or what ultimately proved to be the correct path, the one who fought the dumb decisions. And right down the line he was ridden over like a Mack truck. I don’t think he’s ever gotten credit for being the defender of what was ethical and what was correct. The guy definitely ought to be given a little more credit.”]