In a July 21, 1976, memo to the directors, Pearlman groused that he was being kept in the dark about a guitar synthesizer that was being developed. “I may be oversensitive,” he wrote, suspecting “that Dave Friend and [engineer] Tim Gillette were laying down a smokescreen of concealment for fear that I would prematurely criticize their efforts.”

At about the same time, in a memo to Pearlman, Friend said, “I believe Lew [Pollock] is exhibiting a classic Freudian behavior of a parent who sees his child emerging as an independent adult. … Lew feels that he is in control of ARP now and views my acquiring the title of president as diluting that control.”

And in a July 13, 1997, memo to the executive committee, Pollock insisted: “The company is a rather mature company, and for it to be considered a growth kind of opportunity for investors, acquisitions, etc., the company must, must, have about a 10% pretax earnings. Waiting for next year is no longer excusable.”

Mancuso saw no solution to the strong ambitions and intransigent positions; none of the men was willing to yield power, either to one of the others or to a chief executive officer who might have been brought in. At one point, as he watched his own authority evaporate, Pearlman considered waging a proxy battle to regain control, but — advised against it by his own attorney — he resigned himself to the status quo. “I didn’t know how to fight,” he concedes. 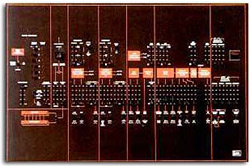 Instead, ARP embarked on the most ambitious and dangerous product-development project it had ever undertaken, one that intensified and underscored the rivalry within the executive committee. After having spent eight years acquiring expertise in building keyboard instruments, ARP undertook to create a guitar synthesizer, the Avatar. The reasoning was that there were four times as many guitarists active in rock bands as keyboard players. Whether those guitarists were willing to pay nearly $3,000 for a synthesizer was a question that was never answered by market research.

The 1977 business plan written by Friend called for a research and development commitment so major that a polyphonic keyboard synthesizer under development had to be shelved. [The project that was shelved was the ARP Centaur, a polyphonic synthesizer that was originally intended to have both guitar and keyboard incarnations. According to Philip Dodds, “The Centaur was the biggest boondoggle you’ve ever seen. There were 115 PC [printed circuit] boards in that unit. It was to be the polyphonic guitar synthesizer that would do it all. I agreed to get involved in the project provided that it would parallel the keyboard version, since that was our forte. But Dave Friend killed the keyboard version and put all his money on the Centaur. During all the dissention, Al Pearlman did a failure analysis on the unit and determined that the average time between breakdowns was about two hours. It was a brute force approach to polyphonic synthesis, with everything implemented using available technology, and as a result it would probably have retailed for between $15,000 and $20,000 — if you could keep it running.”]

As far as Pearlman was concerned, throwing the company into the Avatar project was “dropping the bird in the hand and going for the bird in the bush.” In a memo to the board, he declared, “This project is the riskiest one we have ever undertaken. … There are formidable technical problems of sound analysis, as well as synthesis, and we have an unknown amount of R&D” to produce an acceptable working model. [The problems of sound analysis concerned the performance of the pitch-to-voltage converters that sensed the vibrations of the guitar strings and turned them into DC voltages the synthesizer could work with. The R&D on the synthesizer part of the instrument was less complex, because the Avatar used the same oscillator and filter boards found n the ARP Odyssey.] By the time of this memo, though, Pearlman had virtually lost his voice at ARP. At one point, he actually feared the board might dismiss him. “It became a political party — the guitar party,” he explains. “It was blasphemy to question anything about it.”

Friend, who had been largely responsible for several of the company’s major successes, including the Omni, and whose standing at ARP prospered as a result, was the driving force behind the Avatar. “Pearlman was opposed to the Avatar,” Friend concedes, “but several of our best sellers had been developed over his objections.” Aligning himself with Pollock, Friend obtained approval to proceed. The executive committee voted to fund the project, a move the board supported. “Everybody thought it was going to be the hottest thing since the wheel,” notes Friend.

“They decided to go for $4 million in the first year,” says Pearlman. “Our R&D budget was almost $500,000, and most of it went into the guitar synthesizer. Not only that, we also started to buy inventory for $4 million a year.”

The notion that a $7 million company could sell $4 million worth of an as-yet-untested product struck Pearlman as rather naive. “On the basis of objective reasoning, rather than ‘bandwagon emotions,'” he wrote the board, “It seems that we are planning to spend over 25% of our 1977 R&D money … to make a product which … is more likely to be a disaster than not.”

Friend’s contagious enthusiasm carried the day, but Pearlman’s premonition proved more accurate. Avatar flopped. although it extended the resources of the synthesizer to guitar players, it didn’t do it well enough. Players had difficulty producing a clean sound [because of the imperfections of the pitch-to-voltage converters] and disliked the high price tag. Once the lackluster sales were documented, the Avatar was marketed as a loser. “What you want to do is create a demand,” Mancuso explains. “But they were begging people to buy it. If you bought two of them, you got a deal. A guy bought six, they shipped him seven — that kind of marketing.”

ARP sold only $1 million worth of Avatars in the two-year life span of the instrument. “In 1979, we had an operating loss of about $700,000 and an inventory writeoff [the cost of instruments in stock that haven’t been sold] of about $300,000,” Pearlman recalls. “Essentially, we blew our brains out on that instrument.”

In the meantime, Mancuso had been desperately trying to peddle the company. “I was trying like hell to sell it,” he says with a laugh. “I thought one day I’d slip a letter under their hands and have them sign it — ‘Ha, ha, we fooled you, it’s sold!’ They’d have been a lot better off.” Mancuso got as far as an informal offer of $10 per share from Gulf & Western Manufacturing Co., when the stock was trading at about $4 per share. But the board remained intransigent. For his efforts, Mancuso was fired.

The same disunity and political infighting that had marked the birth of the Avatar prevented the sale of the company. Pearlman, more and more confident that insolvency awaited, was eager to explore the possibility, but he wasn’t able to. The board passed a motion prohibiting any officer from talking to a prospective buyer until the offer had been cleared by ARP’s law firm — that is, by Pollock. Pearlman found himself reduced to holding an “unofficial” meeting with an interested party at Boston’s Logan Airport.

Feelers from CBS Musical Instruments were accorded cool and, according to one insider, occasionally arrogant responses.