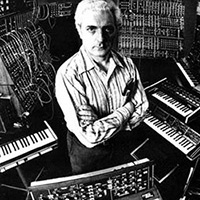 Electronic music is a medium of expression, not a specific type of music. When a pianist sits down and does a virtuoso performance he is in a technical sense transmitting more information to a machine than any other human activity involving machinery allows.
–Robert Moog

More than any other modern electronic music scientist, this man – and the synthesizer that bears his name – has achieved world wide recognition and remains unparalleled in having created a milestone in contemporary music. He’s been honored at the Smithsonian Museum, has received honorary doctorates from universities all over the USA and his Moog Synthesizer skyrocketed to fame after its mainstream debut in 1968. Countless music groups like the Beatles, {ln:Kraftwerk}, Jan Hammer, 70’s progressive rock and soul, and 80’s new wave – all employed this remarkable instrument to create some of popular music’s greatest hits. Trivia: the huge Moog bought by the Rolling Stones in 1967 was used once and then sold to Tangerine Dream, an electronic music group from Germany that was rising in popularity at that time. And in the late 1980’s a young Liam Howlett acquired a Moog instrument called the Prodigy, dropped his classical music career and used the name of the synthesizer for his group that became one of the UK’s biggest rave music ambassadors. 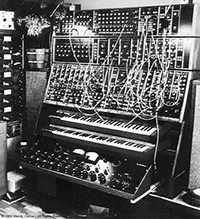 Robert Moog was born in New York and has degrees in physics and electrical engineering from some of the best universities in the USA. Around 1954 he founded the R.A. Moog Company to design electronic instruments. By 1964 the company had produced a full line of synthesizer equipment that ended up in electronic research centers and experimental music studios, and for which innovative, modern composers like John Cage took a keen interest. Then in 1968 the release of the classical music album “Switched On Bach” by Wendy Carlos broke records, winning three Grammy awards for an album completely played on a Moog synthesizer and suddenly everyone had to have one! Japanese electronic musician/composer Tomita was another protegé of the instrument, following close behind with a hit LP of classical reveries using the Moog prominently in his recordings. Countless rock groups followed like Emerson, Lake and Palmer, and a new electronic music trend had hit the mainstream like a bullet.

But Robert Moog was just beginning! In the early 70’s he developed the “Minimoog” that was not only smaller and more practical but was also much less expensive. This was a breakthrough from the first models that often took hours to set up and use. Hence the Minimoog became a household name and an integral part of any modern recording studio, no matter what style. In 1977 he left his company, now called Moog Music, Inc., and moved to North Carolina where continued to design and build other types of electronic music equipment, including theremins. As early as 1949 Robert Moog had already built his first theremin, and in 1989 he repaired Clara Rockmore’s original theremin which helped her to uphold her reputation as the instrument’s undisputed virtuoso. Much of Moog’s later life was expressed through his own website at www.bigbriar.com and the site continues to sell an enormous range of Moos and other electronic music equipment. In 2003 Moog finally reclaimed ownership of Moog Music and in 2004 a documentary film “Moog” was made about the life of this great American inventor.

Every time you hear a quirky, squeeky, eerie or warbly tone in a film, commercial or pop tune, you can bet it is a Moog synthesizer of some kind or a prototype. The sound of a Moog synthesizer has become electronic music’s liaison to general acceptance of its place in the whole of modern music. Over the years it was developed to reproduce almost any possible sound including most conventional instruments. Composers and musicians of the 1960’s and 70’s could practically reproduce the sound of a full orchestra with one machine. While the original versions were very large and had a distinct synthesizer sound, the Minimoog produced amazing variations of keyboard effects and could be held onstage in concert. Early versions of the Moog have become collector’s items and are hotly sought after by the current trend and popularity in retro-electro groups. The first Moog synthesizers were analogue/modular, and it wasn’t until later in the 1980’s that the first digital versions came out of Big Briar. The Moog synthesizer is beyond question one of the greatest inventions in modern music. Robert Moog died of a brain tumor in 2005: another electronic music prodigy whose sound machine will forever immortalize the legacy.