Leon Theremin: The Wild, The Curious And The Spacey 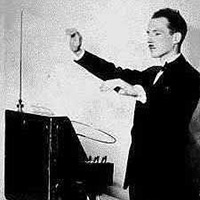 “I was interested in making a different kind of instrument. And I wanted, of course, to make an apparatus that would be controlled in space, exploiting electrical fields, and that would use little energy. Therefore I transformed electronic [equipment] into a musical instrument that would provide greater resources”

Leon Theremin, in an interview in Paris, 1989

Ether Wave – A New Wave
Did you know that the electronic instrument regarded by electro-musicologists as the first-ever to be played commercially required not touching it but rather by only waving ones hands around it? During the futurism and modernism of the 1920’s, a mysterious Russian inventor who packed houses all over the world with his new, wild “ether wave” device, was to become a curio in both the scientific and art scenes of Moscow, Europe and New York. He also invented the first prototype of the television, bugging devices and alarm systems, and was granted a private audience by Lenin in 1922. Disappearing in the late 1930’s and resurfacing in Russia during the 1960’s and 70’s, his endeavors and adventures only added coals to the fire of his strange and enigmatic life story, and to the inventions he so passionately delivered to the world.

Inventions And Spies
He was born in 1896 as Lev Sergeivitch Termen and he became Leon Theremin after arriving in America in 1927. Before that he had been working as a physicist in St. Petersburg and in 1918, while developing alarm mechanisms for the Russian government, he invented what was then called the “etherphone” (music from ether) for which he was granted a Russian patent in 1924. Russia was still teething after its recent revolution and Lenin’s government sent Termen on a “diplomatic” mission to Europe where he demonstrated his new instrument to packed houses: moving his magic hands over the instrument in the grand concert halls of Germany, in the grandeur of the Paris Opera and finally before a dumbstruck audience of 8000 people in London’s Albert Hall. In late 1927 he arrived in New York and the next year played together with the New York Philharmonic to enthusiastic crowds. Consequently he received an American patent for what was also called the “thereminvox”, the rights to which he eventually sold to RCA for commercial purposes.

}It can be safely said that all electronic instruments trace their roots back to this strange gadget. For audiences used to conventional music performances in theatres, the sight of him waving his hands around the standing box with its two antennas was no less than sensational. In 1930 a group of ten thereminists were gathered to perform with the instruments at New York’s prestigious Carnegie Hall, in what became the first orchestra of musicians playing electronic instruments. Theremin went on to recruit many students including another Russian immigrant in New York, Clara Rockmore, who subsequently became the best known of his protégés. She pursued a career dedicated to the instrument, which spanned many years of theremin concert tours and even recorded a CD (”The Art of the Theremin”) before her death in 1998.

During the 1930’s Leon Theremin worked with various modern composers including Varèse and Stokowski (for whose orchestra Theremin built instruments), invented another instrument “rhythmicon” and married the star ballerina of New York’s American Negro Ballet, Lavinia Williams. Albert Einstein was a frequent visitor (being himself a hobby violinist) and society seemed to accept this scandalous inventor in spite of his marriage to an African-American dancer. But in 1938 Theremin disappeared, feared captured by the now Stalinist Soviet KGB who purportedly took him back to Russia – a claim made by his wife and later confirmed after he was traced to work camps where he and other imprisoned Russian technologists and scientists were given diverse engineering duties. Theremin was released from imprisonment in 1958 but was not allowed to leave the Soviet Union until 1989. In the 1970’s he trained the young Lydia Kavina who in turn became Russia’s acclaimed thereminist virtuoso, and who still gives concerts today. In all, Leon Theremin’s state arrest in the Soviet Union amounted to 51 years of his life. 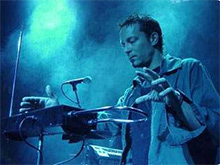 The theremin’s sound is produced by the usage of two oscillators, one of which operates in frequencies that cannot be heard by the human ear. The other frequency can be altered by moving the hands in the oscillator’s magnetic field and thus the tone is produced. Two antennas (one vertical and the other circular) dominate its distinct appearance and create the magnetic field in which the left side produces volume and the right side the pitch. The original theremin stood about 3 feet tall in a wooden cabinet with the two antennas on top, a tubular loop on the side and a few extra control knobs. However, over the years its physical structure took on slightly different forms. Sometimes it can sound scary – played classically it often falls into a forlorn drone but in modern interpretations it sounds pretty cool! It’s easy to understand why the emerging, contemporary composers of the 1950’s and 60’s wanted to use it. A look through your (or your parent’s) CD collection would probably prove fruitful: Led Zeppelin, the Beach Boys (yeah, that’s a theremin in “Good Vibrations”), Radiohead, The Pixies and the German pop group Monta, to name only a few in the incredibly long list of theremin users in the music industry. In addition to this, the earliest commercial usage of the theremin can be heard in countless science fiction films of the 1950’s, and the creepy sound became forever allied with the aliens arriving to take over the world. The most recent sci-fi example was the theremin’s comeback in the soundtrack for the film “Mars Attacks!”.

In earlier times electronic music was considered erratic, quirky and regarded simply as “sound effects” by conservative music lovers. Leon Theremin and his beloved instrument thought otherwise; Clara Rockmore and Lydia Kavina drove the passion home. In 1989 Theremin was finally allowed to leave Russia and after a brief stay in Paris, he was reunited with Rockmore in New York for an historic concert together in 1991. At the Sundance Film Festival in 1994, the award-winning documentary film about Theremin’s life, “Theremin – An Electronic Odyssey”, found yet again a highly enthusiastic audience for the celebrated Russian inventor and his instrument. Directed, produced and written by Steven M. Martin, the film features Clara Rockmore and Lydia Kavina, Leon Theremin, Robert Moog (who built and sold hundreds of theremins during his career) and Brian Wilson of The Beach Boys. The DVD version of the documentary can be purchased online at Amazon.

Legacies and Tributes
Lev Sergeivitch Termen eventually returned to Moscow where he died in 1993. His life story has been told countless times in books and magazines and of course in dozens of sometimes excellent Theremin websites with even more detailed biographies, forums and related articles. A few standouts:

Thus it is clear that the theremin deservedly holds one of the most important places in the electronic music hall of fame.