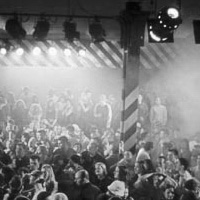 It’s hard, at first, to see how a story about a building could also be a story about memory, status, nostalgia, money, madness (in)experience, simple greed (and saintly generosity), youth, life, death and violence. Even music. Not really a story at all then. More like a soap opera. As far as most people are concerned, the story of a building which became a club, an idea and even a lifestyle begins in the middle. And the end? Well, there isn’t one yet. Because this story is a cultural autopsy with the death certificate lost forever in the post.

“We played there in `85 and `88. In 1987 me and a load of mates went down The Hacienda and sat in the corner off our heads on E. Then there were about 20 people there two or three months later there were more than 2,000”
Shaun Ryder [ was in the Happy Mondays, now in Black Grape ]

The Hacienda is 15 years old. Five would be an achievement. Ten worth writing home about. But 15? The founders seemed full of optimism about the club back in 1982, but not many of them could have thought much about 15 years down the line, or about the significance the place would come to have. After all, this is only a building we’re talking about. Just some bricks and mortar which changed the course of British club culture, and more than a few lives.

It’s 1981. You are Rob Gretton and you have nowhere to go at night. Nowhere at least that suits you – a no-nonsense Northerner with a few bob in your pocket – secretly too arty for tatty pubs and too young for dinner parties. You or I might have gone to night school or taken up crosswords. Rob instead decided to buttonhole a few of his mates who, like him, had recently come into a few bob through this pop music lark – rambling on about an idea he’d had about opening a club.

The idea was not a new one. Since 1978, Tony Wilson, television presenter and punk rock enthusiast, had hosted The Factory at The Russell Club in Hulme, Manchester, putting on local names and likely chancers – big national and even international names for spitting kids in ill-fitting jackets. Tony had a record label also called Factory, and Rob managed a local group called Joy Division who had put out some records on Tony’s label. Joy Division, after the suicide of their singer Ian Curtis, had by late 1980 become New Order. By this stage, with The Factory finished, Rob was thinking of a different kind of club. A purpose-built place that you actually owned – not some badly-lit basement that you borrowed off some thug in a camel coat. When asked many years later why he had come up with the idea, Rob, typically flip, would claim he wanted somewhere he could go to “ogle birds”.

By then part of a successful Factory Records via a loose and revolutionary verbal profit-sharing agreement between New Order and the label, Rob knew his idea would take a great deal more than his own money to complete. So he persisted. Going on about it until Tony and former actor Alan Erasmus (also part of Factory and later The Hacienda) consented and told him to get on with it.

By the summer of 19B1, things were under way. Having promoted a New Order gig at the Manchester Students’ Union to the satisfaction of everyone concerned, Howard Jones (no, not him) was hired to find a venue. He found the International Marine Centre, housed in an 19905 building on Whitworth Street, in the middle of a then grim-looking postindustrial cityscape. The place was huge, but its scale matched the ambitions of the entrepreneurial dreamers who took it over.

Graphic artist Peter Saville, a long-standing Factory associate, had added his distinctive style to many Factory record sleeves. He mentioned his friend Ben Kelly as the man who could turn an unassuming interior into a club environment to equal the likes of New York’s Danceteria, Fun House and Paradise Garage – places that Rob and Tony, now touring with New Order, would enthuse about as ultimate night-time spaces. Kelly saw the building and jumped at the chance. Whitbread Breweries were persuaded to part with £140,000 to assist in the project. This, given the size of the venue and Kelly’s plans, would just about pay for the paint. New Order contributed around £70 000 It is said that the lease on the building and the eventual conversion cost around £340 000 The rest came from Factory itself.

Somewhere close to schedule, with the walls still wet and planks covering areas of unfinished floor, The Hacienda opened on May 21, 1982. With a retrospective significance, Wigan Casino, the capital of Northern Soul, had closed its doors in December 1981. By the time the Hacienda reached warp speed in early 1989, the similarities were clear – same tempo, same obsession with the obscure musical products of black America. But the drug was new – new at least if you weren’t big on keeping abreast of pharmaceutical developments originating in Germany at the start of the First World War. Had Wigan Casino survived it might have passed on a few lessons about the obstacles this impressive new space – christened with its own Factory catalogue number, 51 – would face. Had the Casino survived, both clubs would have been places of worship at either end of the East Lancashire Road – like the twin cathedrals spanning Liverpool’s Hope Street. Except that this time the religion would have been the same.

The name – The Hacienda – had come from some obscurantist Situationist text that Rob had been leafing through. Quoted endlessly since then, the piece, written by Ivan Chtcheglov in 1953, contains the phrase “The Hacienda must be built”. Negotiating the planks on the opening night, you might have amended Gretton’s tag line to “The Hacienda must be finished”. On the 21st it was invite only – and the new-wave hierarchy were out in force. Hewan Clark was the DJ. He went on to DJ every single night the club was open for the next four years, an impressive feat considering the initial madness of a decision to open seven days a week.

Hewan, a funk and soul D at black music club The Reno, had been a kind of support act on tours with A Certain Ratio. Tony Wilson managed ACR and he and Hewan had clicked – both enthusing over the same favourite DJ: Frankie Crocker at New York’s WBLS. Wilson told Hewan he was opening his own club and that he wanted him to be the DJ. Every night.

“Of a strained directors’ meeting during the 1991 difficulties: ‘I said to Barney [Sumner], ‘I know it’s been one long saga of human hell, but if there’s a button you could press and the club never existed, you couldn’t press it.’ He replied: ‘Where’s the fucking button?'”
Anthony Wilson [ Factory ‘Supremo’ ]

Northern irony being no better back then than it is now, alleged comedian Bernard Manning was hired to open the club. With people still gawping at the industrial majesty of it all, Manning, evidently keen to secure Ben Kelly’s services for a refit at his own Embassy Club, grumbled into a troublesome mic: “I’ve played some shit-holes in my time but this is really something.” He later disappeared, puzzled and waiving his usual fee.

The Architectural Review disagreed with Manning’s appraisal, declaring the club “a pioneering interior”. For people who only listen to records and just need a big space to do it in, your first time at The Hacienda was (is) a breathtaking crash course in the aesthetics of design. It’s impossible to escape the idea that through Ben Kelly, the club, like the labels, had realised a unique vision of how things should be – changing overnight the expectations of UK club-goers used to being treated like dirt.