The ER1 is a 6-voice programmable beatbox, unashamedly in the vintage Roland TR style — maybe not in appearance, but definitely in concept and execution. Unusually, the percussion sounds are constructed from four programmable oscillators and four adjustable percussion samples (open/closed hi-hat, crash and clap). There are also two audio inputs which can be integrated into rhythm pattern steps and processed like the other percussion voices. Rhythms are constructed using the now-classic Roland-style step programming method (as used on the TR707, 808, and 909). The ER1 comes with 192 preset patterns, and users can overwrite these with 256 of their own making.

Each of the four percussion oscillators has the following controls:

In addition, every voice (this includes the oscillators, PCM samples and external inputs) also has Decay, Level, Pan and a Low Boost control. The Low Boost introduces a pleasant bass distortion and really does what it says, with a vengeance, so be careful with your speakers — particularly if you’re using it on more than one percussion sound.

A further sound-modifying feature is the inclusion of two ring modulators. One works in conjunction with oscillators 1 and 2, while the other works with oscillator 4 and either of the external audio inputs. As with all ring modulators, two sounds have to be present simultaneously for any sound to be heard. This means any voices to be ring-modulated have to be on the same pattern step number, or you’ll just hear the sound of silence. When used with an external audio input, therefore, you’ll need to keep the flow of sound constant to get results (which, by the way, are very good).

Whereas the EA1 essentially operates as two independent synths, each with its own mono output, the ER1 is a stereo unit, hence the presence of voice pan controls and ping-pong type stereo delays.

Instead of the single Part Select button of the EA1, the ER1 has a Part Select bank of 13 buttons — 10 for selecting voices, two for the Ring Modulators and one for the Accent feature. As only one voice button is ever active, you can see at a glance which voice is currently being edited or available for placing into a rhythm pattern.

Each of the four PCM samples can be transposed over a wide range using the Pitch knob and further modified using the Decay and Low Boost controls, but only two samples can sound at once. To be honest, I could do without the rather lacklustre samples (which all sound like they were taken from an ancient TR909) and would rather have a couple more oscillators to play with, because the range of sounds available from the percussion oscillators is truly astounding. Even with only four oscillators, some incredibly complex and unique-sounding patterns can be built up, like nothing you’ve heard before. 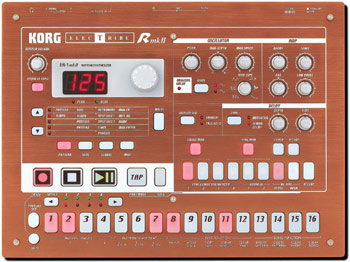 Some of this sonic flexibility can be attributed to the slightly different implementation of the Motion Sequencer in the ER1 (of which more later), but the almost infinite modulation and pitch-warping possibilities available to the percussion oscillators outshine the oscillators in the totally non-LFO-equipped EA1 by miles. Sure, you can simulate run-of-the-mill analogue kick drums, snares, toms and hi-hats, but the ER1 really shines when it’s making none of these bog-standard drum sounds.

Pattern recording will be familiar territory to anyone who’s used a Roland TR drum machine, Steinberg’s Rebirth, or anything that uses the standard step-time method. Step-time is the default recording mode, and is always active in Play, Pause and Stop modes. As with the EA1, you can set the number of steps from 12 to 64, and the time signature can be 4/4, 3/4 or 4/4 with triplets.

To record a pattern you just select a voice (using the Part Select bank) and tap a few of the Pattern buttons, which now glow steadily; if a rhythm is playing you see the familiar 808/909-style running LED display along the Pattern buttons. Add more voices or steps as you go along and build up a rhythm — and that’s it! Song construction is the same as on the EA1.<

The ER1’s Motion Sequencer works in a slightly different manner to that of the EA1 (and is, I would say, an improvement on it). The global stereo Delay effect is essentially the same as the EA1’s mono versions and can produce the same type of wacky flange-y effects. It has two parameters: Tempo (synchronised to the song’s tempo) and Motion Seq; in the ER1, however, the delay effect has a dedicated Motion Sequencer for each pattern. In addition, all the voices have their own Motion Sequencer, which can record knob movements for any of the controls associated with a particular voice — now that’s more like it!

With this much control at your fingertips you can of course go completely over the top if you wish, sweeping the pitch of every oscillator and sample throughout a pattern. There’s a very useful Part Solo/Part Mute feature for isolating or muting individual voices (playing or paused) and, interestingly, I found that the ER1’s voices respond to velocity over MIDI. Quite why the EA1’s don’t I’m not sure, but they ought to.