The EA1 contains two independent programmable monosynths, with independent mono outputs and effects, while the {ln:Korg ER-1 mk II ‘ER1 rhythm synth} is a 6-voice stereo beatbox offering two sample-based voices and four physically modelled ones. Both provide built-in pattern-based sequencing along with plentiful helpings of real-time control, including a Motion Sequencer which allows (some of) your real-time knob movements to be recorded within a song.

In terms of sound generation, the EA1 contains two independent programmable monophonic synthesizers, each of a straightforward two-oscillator design and combining traditional analogue features such as portamento, oscillator sync, and ring modulation with more unusual features like Decimation (bit reduction) and distortion. The full parameter list for each of the EA1’s synths is as follows: 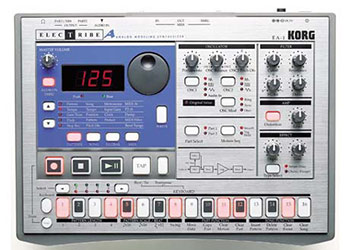 The synths in the EA1 are based around the analogue modelling technology used in Korg’s Z1, and in this incarnation are laid out in a standard VCO-VCF-VCA-EG configuration. As you can see from the features list above, they offer a reasonable arsenal of controls and parameters to play with. The frequency range of the oscillators is wide, though Osc 1’s isn’t as great as that of Osc 2. Strangely, in their raw state the waveforms all sound vaguely samey: the ring modulator and sync settings, on the other hand, sound as you would expect from an analogue synth, and the Decimator imposes a down-sampled, grungy edginess to the waveform.

The filter is a good approximation of an analogue low-pass type that sounds more ‘Japanese’ than ‘American’ (or more Korg/Roland than ARP/Moog). Although it can be persuaded to self-oscillate, when doing so it displays some uneven peaks and troughs while sweeping. But, all told, not a bad filter.

The envelope control is a bit of a let-down, though. The Amp section isn’t envelope-controllable at all — it’s either on or off — and the filter control is severely limited, offering just an EG Int knob (envelope depth) with a centre null/off position and negative control to the left and positive to the right. This is coupled with a simple Decay control, and although there’s no attack control one can be approximated using negative depth values with longer decay settings. Because there is no Amp envelope control, however, there is always a slight blip at the front of the sound.

The EA1’s distortion is another on/off effect and works well enough, though it could hardly be described as subtle. There are, however, some redeeming features in the rest of the effects section. The Chorus/Flanger effect is basic, with only two controls, but sounds fine. The Depth parameter both controls the depth of the effect and introduces feedback at the higher settings, while the Time control (or speed in this case) ranges from the very slow to the ridiculously fast (0.2Hz-5kHz) — which is actually fast enough produce audio-frequency (and hence audible) oscillation. As you can imagine, at the higher speeds this produces some beautifully crazed and over-the-top manipulations.

The other principal effect is Tempo Delay. Again, Depth controls two parameters (delay depth and feedback); with the Time knob set to minimum, the effect is like a flanger, while its maximum setting produces delays of a second or more. As the delay is synchronised to the pattern tempo the delay times will vary in accordance with the pattern speed, so at high tempos the maximum delay available will be shorter than at slower speeds. It’s worth noting that because each synth has its own effects section some wonderfully syncopated bouncing echoes can be programmed.