US manufacturer Sequential Circuits had already established themselves as leading players in the market with the Prophet 5 and a range of other synths that included the Pro-One monosynth, the wonderful Prophet T8 and the monstrous Prophet 10.

Around 1982, however, a major change was about to take place in the industry – Sequential’s president, Dave Smith, managed to persuade most of the electronic musical instrument manufacturers in the world to agree on a new communications interface.

Up to this time, synths, sequencers and drum machines were notoriously difficult to interface, especially when connecting instruments from different manufacturers. Whilst you could get round the various incompatibilities, it was a headache.

Some manufacturers had attempted to overcome this – Roland with the DCB (Digital Control Bus) and Oberheim with their ‘System’. However, these were pretty much proprietary interfaces that only worked with the manufacturers’ own products. What Dave Smith proposed was the ‘Universal Musical Interface’ (UMI) that would be fitted as standard on every product so that any equipment from any manufacturer could be used together. It was quite an achievement, not so much technically (electronically, the interface is relatively simple and inexpensive) but just in terms of just getting all these major manufacturers to agree. The original proposal went through a significant number of revisions before being renamed and becoming the MIDI standard we know today. Several prominent Japanese musical instrument companies became involved in engineering the final version and it was a truly international co-operative venture. Nowadays, of course, we take MIDI for granted and use it for everything from playing and sequencing multiple synths and modules on different MIDI channels to synchronisation to patch dumps and more.

The DrumTraks was Sequential’s first digital drum machine and the first one to feature this new-fangled interface. However, it also featured the ‘old’ sync interfaces for connecting to pre-MIDI equipment – as such, it was an ideal bridge for using older instruments in this new world of MIDI. This new interface also meant that (for the first time) you could trigger these drum sounds from a MIDI keyboard with full control over velocity (as was typical of the day, the DrumTraks’ pads were not velocity sensitive). At the time, this was nothing short of magic!

The DrumTraks came with thirteen sounds and each one could be individually tuned and mixed – in fact, tuning and levels could be stored within a pattern to that it was possible to automate pitch changes and also level (and hence dynamics). Sequential made great use of this facility in their promotional material referring to “gorilla claps” – the handclap sound radically transposed down! 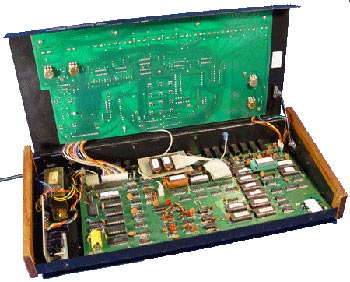 The DrumTraks also had six individual outputs to which any of the thirteen sounds could be assigned for processing and manipulation on an external mixer. Even though they were only 8-bit, the sounds were pretty good too and remain popular even today.