The tribe’s third initiate is the Electribe S (or ES1 to give it its shortened name) which, under the continuing collective slogan “The Cure for the Common Groove”, aims to take the elbow grease out of mutating digital audio into beats to make your pulse race. Billed as a rhythm production sampler, the ES1 marries its sampling facilities with the TR808/909-style, grid-based pattern sequencer that was such a strength of the other Electribe models. Korg’s DSP know-how has been applied to the ES1’s various sound-mangling effects which, in the company’s understated words “let you aggressively process the samples to create your own signature sound”.

These effects, which include Ring Modulation, Distortion and the axe-wielding Decimator, can be applied while resampling (either single sounds or combinations of sounds): they can also sharpen their sonic knives on incoming audio, making the ES1 capable of functioning as a stand-alone ‘warp box’ for any external sound sources whose muscles need toning. And like the first two Electribes, the emphasis is very much on real-time performance, with the ability to record tweakings of knobs as part of a pattern or song.

Physically, the unit follows the lead of its siblings: a compact desktop casing with a smart brushed-aluminium fascia bristling with rubber knobs, LEDs and illuminated buttons. Aside from the flash value (literally), the plethora of controls means the ES1 is extremely easy and intuitive to use. 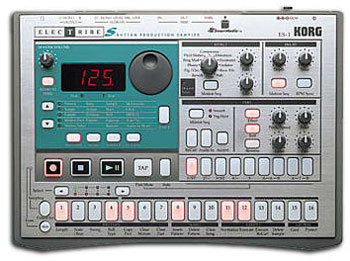 The ES1 can record and store up to 150 samples (100 mono, 50 stereo) with a total capacity of 95 seconds monaural. Sampling frequency is 32kHz which, in these days when even ‘CD-quality’ is becoming a pejorative, may seem too lo-fi for so-called ‘professional’ use. Personally, I wasn’t that fussed, finding that it all added to the ES1’s gritty charm.

Connections-wise, the ES1 offers audio in via a stereo quarter-inch jack socket: you just plug in a mono jack lead if your source is mono. However, regardless of what kind of connection you’ve made, you can still choose whether to sample in stereo or mono from the front panel. The audio in socket has a mic/line switch, plus a small rotary control for more precise trimming of input levels. While the onboard metering facilities consist of just a peak LED meter, it’s actually pretty easy to set up the right levels using just this and your personal inbuilt metering facilities (your ears). Pressing the ES1’s Audio In Thru button routes all incoming audio to the ES1’s outputs, which is good for monitoring and also if you’re short on mixer inputs.

Other back-panel features include a stereo pair of outputs on unbalanced quarter-inch jacks, a headphone socket, MIDI In, Out and Thru, plus the socket for the supplied 9V wall-wart power supply. Also present is a slot for SmartMedia cards (available in sizes 4Mb to 64Mb from all good computer shops), the means by which the ES1 expects you to save and back up your data once its internal memory has been exceeded. Interestingly, the ES1 will also read WAV or AIFF files saved to SmartMedia cards from your computer (though obviously you’ll need appropriate hardware for this, such as a smart card/floppy converter).

Powering up, you’ll find that the ES1 doesn’t come to the party empty-handed. In its factory-fresh memory are already 53 different sounds, plus 64 factory rhythm patterns and three demo songs. These not only act as onboard salesmen for the ES1’s capabilities, but they give the Electribe novice some useful ammunition to explore its features. As on the other Electribes, the presets lean firmly towards the dance scene, with patterns consisting of frenetic drum and bass, hardcore techno and explosive big beat. The sounds themselves consist of electro drum, cymbal and percussion voices, various ‘Uhs’, ‘Ahs’ and ‘Do Its’, plus acid beeps and blips and some trancey hits. Also present are several full drum and percussion loops, designed to show off the unit’s capabilities in the sample-slicing department (of which more anon). If you like what you hear, be aware that overwriting the factory sounds and patterns deletes them permanently from memory.

Sampling is straightforward enough. Plug something into the audio inputs, adjust levels, then once the sampling function is selected hit Play to start and Stop to… well, you guessed it. Surprisingly, there’s no automatic sample-trigger function. If you mistime your button-pressing and need to get rid of unwanted space before or after the sample, then you’ll have to do it manually. This can be a fiddly operation as you’re relying mainly on your ears and the three digits of the main LED to select suitable start and end points. OK, you’ll get there with practice, but anyone who sees sampling as a precise science will not be over-impressed. Along with setting start and end points, you can also apply a fade-out envelope to the sound, though again your ears and the three-digit display are your only guides. Once you’re happy with the results, you need to commit a sound permanently to one of the memory locations (overwriting anything that’s already in there, of course). Further sampling options include Normalise, Delete Sample, Truncate (which permanently deletes the space outside the start and end points) and Time Slice.

This latter function allows you to record a phrase and then chop it up into its component beats à la Steinberg Recycle. Having recorded your phrase (mono sounds only, folks) the ES1 first works out a suitable tempo (which you can modify if the results don’t turn out right), then slices up the sections according to the divisions defined by the Scale/Beat function (with a choice of 16th notes, 32nd notes or triplets). A user-programmable Sensitivity function helps the ES1 to detect the attack points and thus make finer cuts. This function will also put a release tail on each slice to help fill in the gaps between individual beats when the pattern is played at slower tempos. Once you’ve got the hang of it, it all works pretty well, though it’s at its best when dealing with phrases that have clearly defined attack points and also where you’ve made a decent job of trimming the phrase to the right length in the first place. Once sliced up, individual beats can be turned on and off using the pattern sequencer, enabling you to, say, drop out the snare and then replace it with a one-shot sample programmed on that beat. You can also change tempo without affecting the pitch. The only thing you can’t do is rearrange the order of a time-sliced pattern, though you could resample the beats you want (you can do this via an internal connection, so you don’t have to trail a lead from the outputs to the inputs). You could then create one-shot sounds out of them and then create a new rhythm pattern from the individual sounds.

Each pattern can consist of one time-slice part, up to nine one-shot sample parts, an Accent part and an Audio In part. An Audio In part is like any other except that you’re not determining when a sample will play, you’re determining on which beats the audio gate opens to let any incoming sound through (with the Pitch/Speed control determining how long the gate is open for). This is a great creative function, especially when you need to create a really solid synth bass or lead line alongside your rhythm pattern.

The system is gloriously easy to use, not least because the dancing light display gives you a constant handle on what parts are playing at which time. Also, you can swap quickly and easily between step- and real-time recording, even while you’re in playback mode. Patterns can consist of up to four measures, each measure consisting of 16 or 12 steps (triplet mode). Hence wacky time signatures are definitely out, though this isn’t going to concern the four-on-the-floor fraternity at which the ES1 is firmly squared.

Each part can be individually sculpted by the Part controls, consisting of Pitch/Speed, Filter, Level and Pan controls, plus the Effect, Roll and Reverse buttons (note that in the case of time-sliced parts, all the sounds within the sliced up loop are equally processed). Pressing Effect routes the selected sound to the currently selected insert effect (see the box on page 169 for further details). The only down side here is that you can’t control the amount of effect applied per part. There is also a global Delay effect, with separate Depth and Time controls, which is applied to the pattern as a whole. This can automatically sync to the current tempo, and with the delay times ranging from 5mS to 2 seconds you can produce anything between long, languorous echoes to crazed flangey mayhem.

Given this amount of tweakability alone, the ES1 is capable of ‘aggressive processing’ on a grand scale. But as I mentioned above, the ES1 also shares the other Electribes’ ability to record knob movements as an integral part both of patterns and of songs (known in Electribese as Motion Sequences). You can record one knob movement per part, plus the pressing of the Effect, Roll and Reverse keys, plus the movements of both the Delay Depth and Delay Time controls. You can also edit the Motion Sequence parameters in some detail from the main programming matrix, though it’s a bit fiddly compared to simply twiddling away until it sounds ‘right’.

MIDI-wise the ES1 is pretty well specified. MIDI note numbers are separately programmable for each part in a pattern, so you can play samples and program patterns from, say, an external keyboard — however, while the ES1 responds to velocity it doesn’t respond to pitch-bend. Nevertheless, you can control most of the ES1’s parameters externally via MIDI, including selecting patterns.

Sequences are also transmitted via MIDI, which is great if you want to use the convenience of the ES1’s onboard sequencer to trigger other modules. Knob movements are transmitted over MIDI as NRPNs, enabling you to store and edit them in a sequencer. The ES1 will happily sync with external MIDI sequencers, including those on other Electribe models.

Article written by Nicholas Rowland for Sound on Sound Magazine.