Henry can appear like an “electro-acoustic” snob, but he has also been willing to place his work in a more pop context. In 1969, he added electronic scribbles to the British hard rock of Spooky Tooth’s Ceremony, and in 1967 collaborated with French rocker Michel Colombier on Mass For Today. Most recently, he worked with French avant-gardist Gilbert (Lard Free, Urban Sax) Artman.

Yet he considers himself part of the traditional classical music stream. He studied at the Conservatoire National Superieur de Musique in Paris, and with Nadia Boulanger and Olivier Messiaen. “I am still a traditional composer,” he insists. “It is not the recording of the sound that made me different.”

Henry tends towards manipulations of musical instruments rather than natural sound. “In the Symphonie Pour Un Homme Seul all the instrumental parts, piano, percussion, were played by myself,” he boasts. “It was a music that I played and then, only afterwards was this music fragmented, elaborated upon, using the techniques of the time. I was also experimenting at the time with objects, noises, anything you could create inside the studio, noise from composed objects, invented objects.”

Their compositions sought a musical language that fell between natural sounds and instrumental ones. They wanted the sounds to stand apart from their original context, yet have the musical values and complexity of instruments. So a door wasn’t a door, but a scraping wipe across a bleak landscape. A violin no longer played scales, but a descending drone into a personal hell. 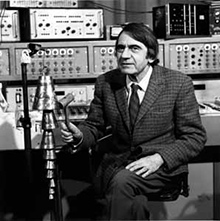 “Music has to do with sounds,” explains Schaeffer, “so we need to find them somewhere and it is preferred to find musical ones. You have two sources for sounds: noises, which always tell you something-a door cracking, a dog barking, the thunder, the storm; and then you have instruments. An instrument tells you, la-la-la-la (sings a scale). Music has to find a passage between noises and instruments. It has to escape. It has to find a compromise and an evasion at the same time; something that would not be dramatic because that has no interest to us, but something that would be more interesting than sounds like Do-Re-Mi-Fa…”

Works like his Masquerage (1952) and Henry’s Well-Tempered Microphone (1951) were far removed from conventional musical scales or language. In the latter work, Henry prepared a piano a la Cage and used different miking placements to generate a discordant orchestra. Remember that this was the early 1950s, and even the microphone was still a recent and relatively unexplored development.

“In the Well-Tempered Microphone,” relates Henry, ‘the idea was to show all the resources of the microphone and of the instrument. By using the microphone for your recording, you could go further than with the instrument itself. The microphone could amplify and magnify the effect of the instrument and, if combined with other little acoustical transformations possible at that time, it could make this effect more magic.” Some of these performances would fit nicely into Looney Toons cartoons. The piano works in particular, like Concerto Des Ambiguites, have the effect of Cecil Taylor on helium. At their best, they succeeded in removing expectations and preconceptions from music, allowing newer thoughts and feelings to prevail.

Schaeffer seized upon a fire engine squealing past his Paris apartment to illustrate their philosophy. “Let us use the example of the fire engine,” he exclaimed. ‘What we are hearing is a musical third, a woodwind instrument, which is here a horn, and finally the siren itself. What the locked groove allows you to do is to conceal the fact that it is a fire truck, to forget that it is a musical third and it allows you to make the instrument sound like another instrument.”

Although Henry worked sparingly with electronics on early compositions like Haut Voltage (1955), his best work bends acoustic material into seemingly synthesized designs. Le Voyage (1961-62) is a timbrally rich and varied excursion based on the Tibetan Book of the Dead, with only violins and voice as its principal sound sources. “There was absolutely no electronically generated sound on Le Voyage,” Henry insisted indignantly. “Le Voyage was a continuation of the experiments of the ’60s, but it was done in a new studio. I think that people should consider me as a creator of music and sounds who worked in different studios that he personally designed. So if there is a difference between Le Voyage and Haut Voltage for instance, it was mostly due to the studio where I was working. The sound depends on the studio where you work.”

The sound also depends upon the stage where you present the work. While Schaeffer’s and Henry’s first compositions were designed for radio concerts, their music caught the fancy of many choreographers and playwrights, chief among them, Maurice Bejart, with whom Henry has had a continuous relationship since the ’50s. Their collaborations, including Haut Voltage, Le Voyage, Mass For Today, and Variations for a Door and a Sigh, brought Henry’s music onto the concert stage where he would sit among his mixers, filters, and tape recorders, performing live mixes and manipulations of his tapes, not unlike Stockhausen working his potentiometers or Brian Eno, who processed Phil Manzanera’s guitar solos with Roxy Music.

In the ’70s, Henry staged expansive works for the concert hall like The Second Symphony, which was “composed for a circular space, the Cirque d’Hiver,” Henry explains. “It was a work for a 16-track recording, which was very ambitious for the time; we used eight stereo tape recorders, wired together and about 100 loudspeakers that would diffuse the sound circularly. People would feel immersed and surrounded by the music.” It makes you wish quadraphonic sound had caught on.

In a more recent work, Futuriste (1980), Henry channels his sound through a variety of acoustic spaces placed on the stage. He had room-sized boxes filled with speakers, bathtubs, old tanks, basins and pipes, all lending their own peculiar resonance to Henry’s prerecorded scores. “It was a work of acoustic and electric diffusion,” he proudly proclaims. “For me it was the best definition of an electro-acoustic concert. It was at the same time vibrant, live, and on tape.”

Curiously, some regard these vanguard artists as anachronistic in the context of new music in general, and the French avant-garde in particular. Composers associated with Pierre Boulez’s Institut de Recherche et Coordination Acoustique/Musique (IRCAM) in Paris, are reputed to snipe at Henry and Schaeffer like they were doddering old tinkerers. For their part, Henry and Schaeffer take any opportunity to lampoon the high-tech computer music of IRCAM.

Schaeffer relates a Pierre Boulez story from the 1950s, illuminating the schism in French music circles. “One day we had the visit of a young and unknown musician, Pierre Boulez. At the time, I was involved in trying to create a solfege that could include many sounds and timbres. I thought we should classify the sounds in terms of their effect on the listener, of their psychological effect. We would classify them in high, low, hard, harsh sounds. Boulez objected to that. He refused to collaborate and left after composing one piece, as boring as usual, with one single sound (Etudes, 1952).”

Of course, with the sophisticated computers at IRCAM, like the 4X Real Time Digital Computer, Boulez and his disciples are able to work at a subtler, almost sub-atomic level of musical sound and structure than Henry and Schaeffer ever could.

Schaeffer, who has spent the last ten years composing philosophical treatises on the state of the world, relates to high technology the way people probably related to his own work when he began in 1948. “I am convinced that synthetic music, so fashionable today, is making a mistake feeding the ear with synthetic sounds. We need to come back to that.”

Schaeffer may get his wish with the abundance of digital samplers on the market, taking sounds from the acoustic world with their harmonically richer structures, and manipulating them into new shapes. Yet, when queried about it, neither Schaeffer nor Henry seemed very interested in the new technology. But embracement of new technology isn’t really the point. Technique ultimately is not music. Henry’s methods may be archaic by contemporary standards, but the resulting music is powerfully evocative by any standards. Popular artist Bill Nelson records his personal music this way, claiming it has an intrinsic and emotional value not unlike woodcarving. He’s joined in this opinion by Brian Eno and Holger Czukay.

Pierre Schaeffer and Pierre Henry made a contribution that has helped shape music for the last 38 years, be it the early tape music works of Otto Luening and Vladimir Ussachevsky at Columbia, and Stockhausen in Germany, the Beatles in their Sgt. Pepper days, or producers Arthur Baker and Martin Rushent today. They owe their genesis to the sounds of a world rearranged by Pierre Schaeffer and Pierre Henry.

This article originally appeared in the December 1986 issue of Electronic Musician.