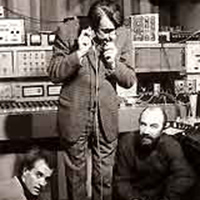 Before Trevor Horn sampled a sound, or Run-DMC scratched a record; when synthesizers were a twinkle in the imagination of Varese and Cage, Pierre Schaeffer and Pierre Henry were transmuting the world of sound. In the mid-’60s, their techniques were arcane: by the early ’80s they were nouveau-chic. But in 1948, they were truly revolutionary.

“Our direction was to turn our back on music and that is crucial,” proclaimed Schaeffer in his elegant, old Paris apartment. “People who try to create a musical revolution do not have a chance, but those who turn their back to music can sometimes find it.”

Shortly alter World War II and shortly before the widespread use of magnetic tape (developed in Germany), Schaeffer and Henry began their revolt by recording sounds from the natural world onto phonograph discs, altering them through the primitive means available, and creating an alarming music that they dubbed musique concrète (pronounced: muzeek kon-kret), or concrete music.

Think of The Art of Noise without a rhythm box and you have a rough approximation of the first masterpiece of musique concrète, Symphonie Pour Un Homme Seul (Symphony for a Man Alone), Schaeffer and Henry created audio portraits for the end of the machine age and the beginning of the electronic age that burst with mechanical noises, orchestral hits, trains, and text-sound babble. Doors open and close on indecipherable conversations; engines start, stop and transform into screams and moans; disembodied pianists jam with mouth noise rhythm sections. Now, almost 40 years later, the scratches on the records they used give this vanguard work a charming, antique quality. 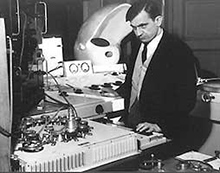 Their studios in the ’50s and ’60s were hotspots of experimentation. They formed the ORTF (French Radio) Experimental Studio in the ’50s, and in 1960 Henry founded the studio APSOME and Schaeffer founded the Groupe De Recherches Musicales. Among his many students was French synthesist Jean-Michel Jarre, who regards Schaeffer as a mentor. “He was very important in my life,” claims Jarre, “because he was the first man to consider music in terms of sound and not notes, harmonies, and chords.”

Schaeffer despised the trends of classical music in the 20th Century, still embroiled in the 12-tone and serialist methods of Arnold Schoenberg and his disciples. “This made for a century,” exclaims Schaeffer, “of the most boring music. Schoenberg, a teacher lacking genius, had a ‘brilliant’ idea. One was supposed to use all 12 notes without repeating any. One is sure in this way to avoid the problems of tonality and to avoid copying Mahler’s music.

“Unfortunately,” he continues, “when you suppress the intervals between notes you suppress music. You make it insignificant. You take the feeling, the intelligence, and meaning away.”

It was Schaeffer who first developed the ideas of musique concrète. Though he was born into a musical family in 1910, his parents forbade him to study music. Instead he went to the Ecole Polytechnic (the French equivalent of MIT), and studied electronics, eventually winding up as an engineer on French radio. During World War II, he was an operator for the French Resistance Radio Network. 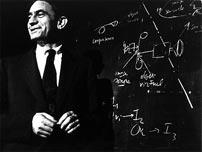 Schaeffer’s method of returning meaning and emotion to music was to go into the world and the sound effects library of his radio studio. “I was actually concerned with the possibilities of radio art,” he recalls. In the process, he became more interested in his sound effects for radio plays rather than the dramas themselves. “From the moment you accumulate sounds and noises, deprived of their dramatic connotations, you cannot help but make music,” he insists.

Using disk lathes, Schaeffer went to locales like the Batignolle Railway Station and etched the rumble of trains into the record’s grooves. “I was attracted to external events and impressive machines,” he states with a grand sweep of his cigarette. “It was an emotional experience because the railroad carries many memories, many psychological and psychosomatic feelings. Sometimes these feelings can be very violent, deeply rooted in your childhood.”

Unlike the earlier Futurist work of Russolo, Schaeffer wanted to remove the original meanings and definitions of his sounds and create a deeper psychological-emotional response. In works such as Etude aux Chemins de Fer (Etude on Railroads), Etude Pathetique (Etude on Pathos), and Etude aux Objets (Etude on Objects), the sounds were familiar, but rearranged into bizarre juxtapositions, in the surrealist style of the era. The techniques of speeding up, slowing down, reversing, editing, and looping were all used to create sonic “collages,” as Schaeffer calls them, all before the advent of tape recorders, let alone digital samplers.

After recording their sounds, they went back into the studio and isolated them, re-recording them onto other disks with different manipulations, including what they called “the locked groove:” putting an intentional skip in the record so a sound would be repeated, not unlike a tape loop or sequencer. Schaeffer describes the recording process. “We would have seven or eight turntables playing together, but with only one sound playing on each. Then we would try different variations, montages with let’s say, sound ‘A’ repeated twice, then a sound ‘B’ then ‘C’ repeated and so on. It was similar to an orchestra rehearsal where you would be trying different themes, different variations.”

Schaeffer has the air of a French aristocrat, dabbling with sound as a philosophical exercise. Pierre Henry, on the other hand, is a classically trained musician and composer who diverged from the traditional route to join in Schaeffer’s experiments in 1949. Henry is restrained and self-absorbed, convinced that he is on the only true musical path. Henry and Schaeffer’s relationship has been turbulent. They are reputed to have broken up in a violent fight in the ’60s, only resuming their friendship a few years ago. Now Schaeffer, who has since stopped composing, gives much of the credit for their music to Henry. Henry, on the other hand, sat silently during Schaeffer’s interview and demanded his own session.

By 1951, they had tape recorders, a medium in which Henry still works almost exclusively. His studio contains a mixing console, two 8-tracks, several 2-track Studers, and rooms full of reel-to-reel tapes of raw sounds. He now calls his work “electro-acoustic music.” Both he and Schaeffer are disdainful of the electronic music that in many ways they helped spawn. “It is important to understand that there is no use of electronically generated sounds in our music,” says Schaeffer. “It is concerned with the acoustics of recorded natural sounds on which we then have the power of transformation.”

These statements aren’t entirely true, however. Synthesizers appear on Schaeffer’s 1978 Etude aux Sons Animes (Etude on Animated Sounds) and sitting unobtrusively next to Henry’s mixing console is an analog synthesizer. “It is just a decoration,” he says with a conspiratorial grin to his aide and translator. “It is not wired in. I do not use it, but it could happen.”