Machine Soul: A History Of Techno 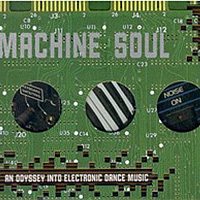 “Oooh oooh Techno city
Hope you enjoy your stay
Welcome to Techno city
You will never want to go away”
–Cybotron, “Techno City” (1984)

“The ‘soul’ of the machines has always been a part of our music. Trance always belongs to repetition, and everybody is looking for trance in life… in sex, in the emotional, in pleasure, in anything… so, the machines produce an absolutely perfect trance.”
–Ralf Hütter, 1991, in Kraftwerk: Man Machine and Music, by Pascal Bussy

At the dawn of the 1980s, {ln:Juan Atkins} began recording what stands as perhaps the most influential body of work in the field of techno. Exploring his vision of a futuristic music which welded the more cosmic side of Parliament funk with rigid computer synth-pop embodied by {ln:Kraftwerk} and the techno-futurist possibilities described by sociologist Alvin Toffler (author of The Third Wave and Future Shock), {ln:Juan Atkins ‘Atkins} blurred his name behind aliases such as Cybotron, Model 500 and Infiniti — all, except for Cybotron, comprised solely of himself — to release many classics of sublime Detroit techno. And though it’s often difficult (and misleading) to pick the precise genesis for any style of music, the easiest choice for techno is an Atkins release, the 1982 electro track “Clear,” recorded by Atkins and Rick Davis as Cybotron.

“It’s like a cry for survival,” a panicked male voice calls out. The beat pauses, but the dancers do not. Then Orbital throw us back into the maelstrom: into a blasting Terry Riley sample, into the relentless machine rhythm, into a total environment of light and sound. We forget about the fact that we’re tired, that the person in front of us is invading our space with his flailing arms. Then, suddenly, we’re there: locked into the trance, the higher energy. It does happen, just like everybody always says: along with thousands of others, we lift off.

The Brixton Academy is a 3500-capacity venue in South London. Built at the turn of the century in the style of a Moorish temple, it may look beautiful but it’s hard to enliven: groups as diverse as the Beastie Boys and Pavement have disappeared into its dark, grimy corners. Tonight, however, it is full of white light and movement: the whole stage is a mass of projections, strobes and dry ice, in front of which a raised dance floor has been put in. Above us is stretched white cloth: at the sides of the building, the alcoves are lit up and flanked by projections of pulsating globules.

The whole scene reminds me of the place I wanted to be when I was 18, the same age as most of this audience: the Avalon Ballroom. Never mind that most of the dancers were born long after the San Francisco scene had passed: they’re busy chasing that everlasting present. The sound is techno but psychedelic references abound: in the light shows, the fashions (everything ranging form beatnik to short-hair to late ’60s long-hair), the T-shirts that read “Feed Your Head” (that climactic line from Jefferson Airplane’s “White Rabbit”), the polydrug use that is going on all around us.

This event is called Midi Circus: an ambitious attempt by the London promoters Megadog to make dance music performance work. It’s obvious from the lightness of the atmosphere that time and energy have been spent on the staging. The acts selected –the Orb, Orbital, the Aphex Twin– are the most interesting working in the techno/psych crossover that has moved into areas formerly associated with rock: large public events, raves, festivals. It’s here you will find the millenarian subculture of techno primitives, half in electronic noise, half in earth-centered paganism.

Orbital’s name is taken from the M25 Orbital motorway that circles London; it comes from the period, three years ago, when huge raves were held around the capital’s outer limits. They’ve had a couple of hits, and have just released a fine second LP (due out in the U.S. next month). Tonight, they stand behind their synths wearing helmets with two beams roughly where their eyes would be. When the dry ice and the strobes are in full effect, they look like trolls from Star Wars, or, perhaps more unsettling, coal miners. And then, as machine noise swirls around us, it hits me. This is industrial displacement. Now that England has lost most of its heavy industry, its children are simulating an industrial experience for their entertainment and transcendence.

At first the art of music sought and achieved purity, limpidity and sweetness of sound. Then different sounds were amalgamated, care being taken, however, to caress the ear with gentle harmonies. Today music, as it becomes continually more complicated, strives to amalgamate the most dissonant, strange and harsh sounds. In this way we come ever closer to noise-sound.
–Luigi Russolo: “The Art of Noises” (1913)

Techno is everywhere in England this year. Beginning as a term applying to a specific form of dance music –the minimal, electronic cuts that Detroiters like Derrick May, {ln:Juan Atkins}, and Kevin Saunderson were making in the mid ’80s– techno has become a catchall pop buzzword: this year’s grunge. When an unabashed Europop record like 2 Unlimited’s “No Limit” –think Snap, think Black Box– blithely includes a rap that goes “Techno techno techno techno,” you know that you’re living within a major pop phenomenon.

My experience of it has been colored by my recent circumstances: frequent travel, usually by car. Techno is the perfect travelling music, being all about speed: its repetitive rhythms, minimal melodies, and textural modulations are perfect for the constantly shifting perspectives offered by high-speed travel. Alternatively, the fizzing electronic sounds all too accurately reproduce the snap of synapses forced to process a relentless, swelling flood of electronic information.

If there is one central idea in techno, it is of the harmony between man and machine. As Juan Atkins puts it: “You gotta look at it like, techno is technological. It’s an attitude to making music that sounds futuristic: something that hasn’t been done before.” This idea is commonplace throughout much of avant-garde 20th-century art –early musical examples include Russolo’s 1913 Art of Noises manifesto and ’20s ballets by Erik Satie (“Relâche”) and George Antheil (“Ballet méchanique”). Many of Russolo’s ideas prefigure today’s techno in everything but the available hardware, like the use of nonmusical instruments in his 1914 composition, Awakening of a City.

Postwar pop culture is predicated on technology, and its use in mass production and consumption. Today’s music technology inevitably favors unlimited mass reproduction, which is one of the reasons why the music industry, using the weapon of copyright, is always fighting a rearguard battle against its free availability. Just think of those “Home Taping Is Killing Music” stickers, the restrictive prices placed on every new Playback/Record facility (the twin tape deck, the DAT), the legal battles between samplers and copyright holders.

There are obviously ethical considerations here –it’s easy to understand James Brown’s outrage as his uncredited beats and screams underpin much of today’s black music– but at its best, today’s new digital, or integrated analog and digital, technology c an encourage a free interplay of ideas, a real exchange of information. Most recording studios in the U.S. and Europe will have a sampler and a rack of CDs: a basic electronic library of {ln:Kraftwerk}, James Brown, Led Zeppelin –today’s Sound Bank.

Rap is where you first heard it –Grandmaster Flash’s 1981 “Wheels of Steel,” which scratched together Queen, Blondie, the Sugarhill Gang, the Furious Five, Sequence, and Spoonie Gee –but what is sampling if not digitized scratching? If rap is more an American phenomenon, techno is where it all comes together in Europe as producers and musicians engage in a dialogue of dazzling speed.