An early acid-house pioneer while still in his teens, Armando contributed several classics to the Chicago canon during the mid-’80s, including “Land of Confusion” and “100 of Dissin’ You.” Born on Chicago’s south side to Cuban immigrants, he was a star on the baseball field until spinal meningitis forced him out of the sport. To fill his time, he began spinning records and was organizing his own parties at the age of 16. One year later he was on the radio as well, subsituting for Farley Keith on Chicago’s biggest dance show, the Hot Mix 5.

Already one of the Windy City’s hottest DJs around the time he received his driver’s license, Armando formed Warehouse Records with Mike Dunn, just in time for his first big releases, 1988’s “151” and “Land of Confusion.” The latter single blew up in Chicago and quickly crossed the Atlantic, just in time for Britain’s acid-house explosion. The following year Armando was on the leading edge of a return to the underground minimalist style typified by his own previous acid club-hits. He provided production on classic Warehouse tracks by Ron Trent (“Altered States”), DJ Rush (“Child Play”) and Robert Armani (“Circus Bells”), and delivered as well with another of his own club smashes, “100 of Dissin’ U.” 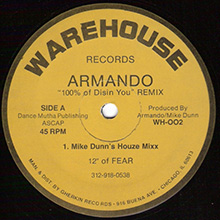 Though he worked on an album for Mike Dunn in 1993, Armando did little actual production during the early ’90s, focusing instead on a residency at the seminal nightclub the Warehouse from 1992 through 1994. After working on A&R at one of the prime third-wave Chicago labels, Felix Da Housecat’s Radikal Fear, he began recording again with the Radikal Fear singles “Transaxual” and “Radikal Bitch,” both of which made Armando a big house favorite yet again, and the Dutch label Djax-Up-Beats licensed much of the Warehouse Records discography for release (with new-school European producers like Hardfloor and Edge of Motion providing fresh remixes for the B-sides). Armando returned the favor, recording singles for European labels including Labwerks, IDM, STR and Djax plus Americans Jive and Dance Mania. In mid-1996, after more than ten years of production, Armando finally recorded his debut album, One World One Future. He also appeared alongside Mike Dunn, Felix Da Housecat, DJ Sneak and Roy Davis, Jr.. on the Radikal Fear LP The Chicago All Stars, but died of leukemia less than two months after its release.