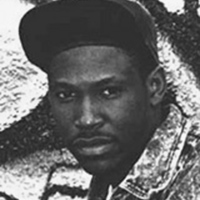 Adonis, often referred to as Acid Budda; Jack Frost; and The King of Bass lines; among other aliases, is an icon of House Culture whose phenomenal music career skyrocketed in the 1980’s by making shock waves on the global dance floors with the recording of many innovative and influential dance tracks.

The creation of a legend began very early as Adonis, who was born and raised on the West Side of Chicago, was introduced to all forms of music at a young age. The first instrument Adonis learned to play was the bass guitar, which also inspired his self-mastery of lead guitar, keyboards, percussion, drums, lyric writing, music composition, and vocals.

His love for music led to his attendance and study of contemporary jazz and orchestrations at the American Conservatory of Music in downtown Chicago, which only further enhanced his musical genius. Before that time of study, during, and afterwards, Adonis began to play bass guitar with many Jazz, Funk and R&B bands in the Chicago area.

One day a friend introduced Adonis to a raw, untamed art form that was brewing in Chicago. Upon hearing it over and over, he was compelled to create more unique beats, rhythms, and sounds than what he had initially heard of this new genre of music, in order to build something greater than what had already been laid down. That art form is now called House Music worldwide, which has spawned the growth over the last quarter-century of acid house, techno, trance, drum & bass. Adonis was responsible for the birth of an Acid House movement, by both silently and publicly producing/co-producing the first Acid House classics to be put on vinyl, and by being the first in Chicago to use the {ln:Roland TB-303 ‘303} to create such classics. He began with some of the classics of the Worldwide House Music explosion, namely “No Way Back”, “Lack of Love”, “We’re Rockin’ Down the House”, “Tom Tom”, “Two the Max”, and “The Poke”, just to name several, while working with the two most prominent Chicago House Music labels of that time period. 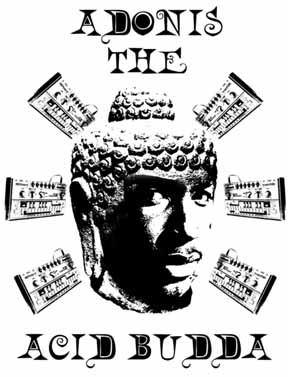 Eventually, Adonis’ personal growth and development propelled him into producing music independently into the 1990’s, both under the explosively popular name he had created for himself, and under various aliases as he occasionally teamed up with other House legends on different projects. It was during that time that Adonis was highly sought after by various record labels, but he decided to sign as an artist/producer with Jive Records, who relentlessly pursued him. Adonis also received a House Music award for being the very first House Music artist to sign with Jive Records. Adonis was also responsible at that time for using his influential position to encourage Jive to sign the following artists also to their label (unbeknownst to them): Mr. Lee, {ln:DJ Pierre}, Darryl Pandy (who rejected Jive’s offer), and Liz Torres. After the 90’s, Adonis returned to his roots and his first love, the love of ALL forms of music, by going back to his lab for the purpose of developing a sound so unique that it breaks new barriers in both music and sound. In addition, Adonis was simultaneously active behind the scenes by continuing to assist others in the music business through guidance, advice, mentoring, and providing a platform for them to grow with the use of his infamous name.

Finally after silently propelling others to the forefront of the House Music industry, this well-known, revered, loved, and respected global icon returned with his new catalogue of over 1000 songs spanning various genres of music, as a gift to the world: “The Adonis Experience” of uniquely affecting music that evokes an awakening of the human spirit, and projects an incessant energy that leaves the listener satisfied, yet craving for more and more with each encounter. Fans all over the world were on the edge of their seats, with bated breath; in eager anticipation of all that “The Adonis Experience” promised to bring in order to permanently change their world and musical knowledge for the better… and once again Adonis broke barriers, did exactly that, plus more than what was expected. Adonis is a true musical pioneer in his own right!