The Korg MS-10s was the most basic, and consequently the most inexpensive, of Korg’s MS series. It featured a 32-note (F-C) keyboard and semi-modular design, in that you could reroute the signal of some modules via patch cords, but you didn’t have to use patch cords to make a basic synthesizer sound. A monophonic synth, the MS-10 had one VCO, one VCF, an LFO with multiple waveforms, an ADSR with hold controls, and knobs to control pitch, portamento time, external signal level, resonance, and pulse width. It also had one wheel, for pitch bend 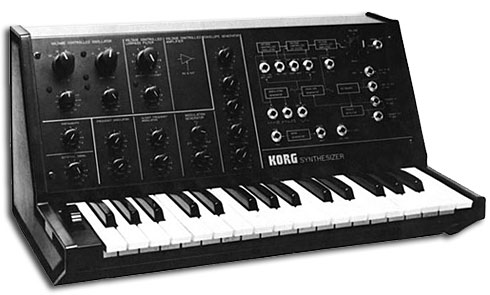 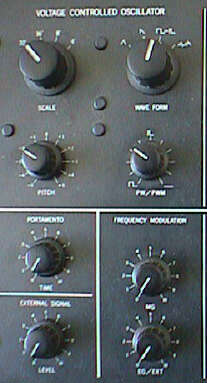 Four Waveforms are available, although only one at a time: Triangle, Ramp (descending), Pulse and Noise.

The top pot in the Frequency Modulation section controls the level of Oscillator Frequency Modulation from the Modulation Generator (LFO), but only the triangle/ramp wave output of the MG. To modulate the oscillator with the MG’s square wave, the patch panel must be used. The bottom controls FM level from the Envelope Generator, until something is plugged into the “FREQ” input.

Note that the “Freq” input is a Volt/Oct (exponential) input, while the VCO CV input is Hertz/Vlt (linear). Why is this important? Most synthesizers operate on the 1 Volt per Octave (exponential) standard of controlling pitch with voltage (if C1 is 1 volt, than C2 is 2 volts, etc.). Korg operates on a linear standard, so controlling an MS-10 with a Roland, Moog or Arp synthesizer, or a standard MIDI to CV device is more difficult than simply connecting the CV out of the exponential device to the CV input of the MS-10. It can be done, however, by connecting the CV out of the exponential device to the VCO “Freq” input, then adjusting the EXT knob in the frequency modulation section until proper tuning is achieved. (Converting triggers is another matter, though. More on that later.)

As with the 20 and the 50, the Filter in the MS-10 is fairly straight forward…that’s not to say, however, that it doesn’t sound great. The warmth added to any patch by careful filter setting really defines the characteristic sound of this instrument.

What is generally referred to as “resonance” on other synthesizers (or “emphasis” in the Moog world) is called “Peak” on the MS-10. Basically, this controls the amount of emphasis given the frequencies closest to the cutoff frequency (as set, obviously, by the Cutoff Frequency pot). When the PEAK control is turned all the way up, it achieves self-oscillation.

The filter can be modulated by the LFO (Modulation Generator), AND by EITHER the Envelope Generator, or by a patched (external) input (as above, the second control knob is dual purpose). As with the VCO, MG modulation is fixed to ramp/triangle wave. To modulate with a square wave, the patch panel must be used. Actual FM (modulation source in the audio range) is achievable via the external input, provided one has an oscillator that can be patched into it (e.g. from an MS-50 or any modular). 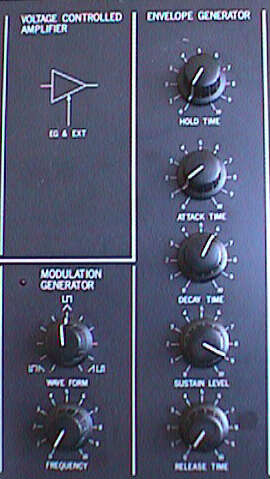 The Voltage Controlled Amplifier in the MS-10 is pre-patched to the Envelope Generator. In other words, in normal operation, the amount of amplification of the sound exactly follows the output produced by the envelope generator. As such, there are no controls in the panel section for the VCA. There is, however, an external input for the VCA (labeled INITIAL GAIN) on the patch panel. Plugging something into this DOES NOT disable the pre-patched connection between the VCA and the EG, instead it simply “adds” to the amount of gain being applied by the EG. As such, using the REV OUT from the EG as a source for this input is not terribly useful (actually not useful at all–the REV OUT outputs a negative voltage, and the INITIAL GAIN accepts only positive voltage inputs).

The Envelope Generator on the MS-10 is simple:

The only non “standard” feature is the “Hold” option. This control essentially adds a hold time from when the key is released, until the envelope proceeds to the “Release” stage.

On the patch panel, a REV OUT option is added. This outputs a voltage of from 0 to NEGATIVE 5 volts and is the exact “mirror image” of the 0 to POSITIVE 5 volts EG output (which is not accessible via the patch panel, unfortunately). This can be used as a modulation source for:

What Korg stubbornly refers to as a “Modulation Generator” is, in fact, a Low Frequency Oscillator (or LFO). It oscillates away, like the VCO, except in the sub-audio range (and it’s not voltage controlled, but then very few LFO’s are). What’s somewhat misleading about the name Modulation Generator, is that it is only one of several modulation sources (the others being the EG, the Wheel, Portamento, noise and keyboard CV).

Aside from the name thing, however, the MS-10’s MG is a simple, yet surprisingly versatile modulation source. It simultaneously outputs a variable triangle/ramp wave and a variable pulse (square) wave. The controls are a (very rare) waveform control knob and a frequency control knob. 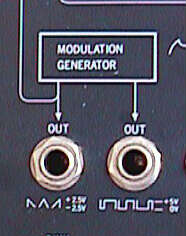 Internally, the triangle/ramp output is pre-patched to the modulate the VCO frequency and/or the VCF cutoff frequency. Via the “Wave Form” knob, it can be adjusted from descending ramp wave, to triangle wave, to ascending ramp wave.

The triangle/ramp wave output is also available via the patch panel and outputs a voltage of from -2.5 V to +2.5 V. As such, if it is used to modulate the VCA (via INITIAL GAIN) only half the cycle of the waveform is recognized. It’s still a moderately useful effect (and is described more fully in the VCA section). Aside from that, since the triangle/ramp output is already pre-patched internally to the VCF and the VCO, the only additional destination offered by its inclusion on the patch panel is Pulse Width Modulation (as described on the oscillator page). {Of course, if one also has another MS-10, or a 20 or 50, it can be used as an additional modulation source there as well.}