The K1m is the table top module version of the K1 keyboard. It shares the same basic synth architecture as the K1, K1-II, K1r, and K1RII.

The sound architecture of the K1 is simple, but not crippling. Four DCOs (DAs, really) with four DADSR EG’d DCAs. They’re organized into two pairs whose contributing DCO outputs can be summed or amplitude-modulated. In memory, there are 256 8-bit PCM samples (204 loop waveforms, another 51 misc longer one-hit or loop samples).

A single LFO can modulate some aspects of the sound, but that’s basically it. No filter section, a step backwards from the k3’s design. Kawai may have felt the large variety of waveforms compensated for the lack of filters, as they cover a variety of harmonics. The lack of a filter is the biggest single complaint about the k1 architecture, an issue Kawai addresses in their k4 line.

Single and Multi banks each contain up to 32 single patches split into four pages of eight patches each. This can be doubled with a Kawai DC-8 RAM card. Up to eight single patches can assembled into a multi patch, which can then be split by keyboard range and velocity with various other modulation-oriented options (keyboard velocity curves, tuning and amplitude offsets, etc).

The K1 in its Multi-mode features some great multi-timbral functions. You can make it receive on different MIDI channels, stack the sounds, split and overlap them, pan them left or right, even use velocity cross-fading to switch between the sounds. Unfortunately the processor of the K1 appears to be way too underpowered, and it can’t deal with program changes and massive MIDI data while playing notes. If you throw more than four simultaneous MIDI events at it, the processor will simply stop responding, creating half a second of complete silence. And that’s not a good thing in a recording situation.

The synth mostly falls flat when attempting to recreate accoustic instruments in its factory presets, but there are some exceptions and gems of patch programming in public domain downloadable sysex patch libraries. Electric instruments are a little better, with some fairly convincing non-leslie B3 patches, and non-filtered analog string patches to be heard. Where the k1 architecture really shines, though, is as a gritty bright experimental electronic-patch synth or as a pad synth. Because there is no on-board fx processing, you’ll probably want to run this through some sort of multi-fx processor, although you can get a nice chorusing effect by layering detuned DCOs in your single or detuned multi patches. Some realtime control is possible through aftertouch. And even the joystick controller on the k1m and k1 keyboard can be used to modulate the sound in realtime, though it is limited to mixing the output levels of the tone sources (great on B3 organ patches!). The joystick is sadly missing from the k1r and k1rII. 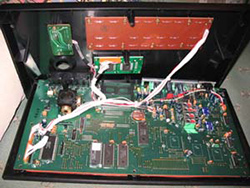 Early versions of the firmware may have had SysEx implementation bugs that effected patch editing.. The firmware revision can be determined by holding in the ‘SYSTEM’ button when turning the power on.